As protests erupt at Apple’s Foxconn production facility in China, the hypocrisy of ‘environment, social, governance’ (ESG) accounting is exposed, says Friends of Science Society. The establishment of mandatory reporting on NetZero plans, proposed by the UN HLEG and ESG standards proposed by ISSB/CPAs shows a lack of due diligence in terms of materials supply; meanwhile, Mauna Loa’s eruption takes out the Keeling CO2 monitoring station. 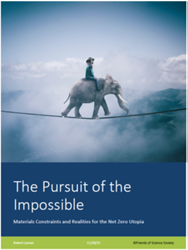 if ESG were just an “analytical tool” as Gore suggests, then Apple would be at the bottom of every ESG ratings table available and would have been sold off by every ESG fund ages ago. Apple’s ESG/sustainability efforts are – INARGUABLY – superficial

(Calgary, Alberta) Parts of China have been rocked by vehement protests in recent days, specifically at the Apple contractor Foxconn complex, as reported by CNN, Nov. 24, 2022, the details of which expose the hypocrisy of “ESG” reporting and corporate evaluation, says Friends of Science Society.

Steve Soukup, author of “The Dictatorship of Woke Capital” wrote a scathing review in The Political Forum:

“Apple is one of the ESG movement’s darlings. At the end of 2019, Apple was the single largest position BlackRock held [world’s largest asset manager]. Moreover, it was one of the top five companies held by all actively managed ESG equity portfolios. … Most significantly, Cook and Apple have been among the most aggressive companies in advocating for a “carbon-free” future….”

“The current defense du jour of ESG is that it’s not a politicized investment strategy but, rather, a simple risk-assessment tool. As Al Gore put it earlier this month in a Wall Street Journal op-ed: “ESG factors shed light on the quality of a business and help investment managers develop a clearer view of a company’s true market value.”

“If this were really the case, however, if ESG were just an “analytical tool” as Gore suggests, then Apple would be at the bottom of every ESG ratings table available and would have been sold off by every ESG fund ages ago. Apple’s ESG/sustainability efforts are – INARGUABLY – superficial.”

On Oct. 19, 2022, Missouri Attorney General Eric Schmitt launched an investigation into six major banks (part of the NetZero alliance) over ESG investing and fossil fuel divestment activity: “We are leading a coalition investigating banks for ceding authority to the U.N., which will only result in the killing of American companies that don’t subscribe to the woke, climate agenda...”

Friends of Science questions the recent statement from the Chartered Professional Accountants (CPAs) of Canada promoting ESG and the ISSB – International Sustainability Standards Board which promotes ESG and climate risk disclosure by corporations.

Friends of Science Society says this is laughable in the face of natural unpredictable climate variability, pointing to the Hunga Tonga eruption, discussed in Science, Nov. 3, 2022. This undersea eruption loaded the upper atmosphere with an estimated 50 billion kilograms of water, as reported by Ars Technica on Sept 22, 2022. This will have ongoing climatic effects as water vapor is the most powerful greenhouse gas (GHG).

The climatic effect of water vapor is discussed in Friends of Science Society’s “Climate Science Essay.”

Likewise, the world’s most active volcano, Mauna Loa, just erupted. This is where the Keeling CO2 monitoring site is located, the benchmark for monitoring global CO2 concentrations. The facility’s access has been blocked by lava flows and shut down due to a power failure related to the eruption as reported by West Hawaii Today on Nov. 28, 2022.

As stated by Prof. Wyss Yim in his recent presentation on volcanoes and their impact on climate: “Based on timing and observation records volcanic eruptions are an important regional driver of natural climate variability. Carbon dioxide identified by the IPCC for Anthropogenic Global Warming (AGW) cannot be the cause.”

The UN HLEG “Integrity Matters” report, proposing dictatorial mandatory NetZero reporting poses a risk to society, says Friends of Science. The parties to the report did no due diligence to see if NetZero is even technically feasible. It is not. Robert Lyman has summarized Simon Michaux’s exceptional NetZero materials supply analysis in a shorter plain language report titled: “The Pursuit of the Impossible: Materials Constraints and Realities for the NetZero Utopia.”

About
Friends of Science Society is an independent group of earth, atmospheric and solar scientists, engineers, and citizens that is celebrating its 20th year of offering climate science insights. After a thorough review of a broad spectrum of literature on climate change, Friends of Science Society has concluded that the sun is the main driver of climate change, not carbon dioxide (CO2).