CubX by T&T features four innovative aspects that are sure to impress Tetris lovers, and create a whole new generation of addicted fans: a detachable platform, falling and rising blocks, multiple game modes, and cool boosters. The new no-cost app is available for iOS and Android devices. 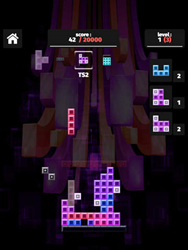 Throughout the 1980s and 1990s, millions of people around the world spent an enormous amount of time happily moving blocks around to feed their neverending Tetris obsession. Fast forward a few decades, and developers T&T have taken things to a whole new level with their ultra addictive new no-cost game CubX.

Available for both iOS and Android devices, CubX echoes Tetris in the sense that users must skillfully catch falling blocks (which the app calls “tetrominos”) in order to create lines, which then disappear. Failing to do this often or quickly enough ends the game.

However, CubX is by no means a Tetris knock-off, because there are four innovative aspects that are sure to create a whole new generation of addicted fans: the platform, the orientation, multiple games, and boosters.

Other CubX special features include:

“The idea behind CubX is very simple to understand: users don’t control the pieces anymore. Instead they control the platform that catches the pieces,” commented Jean-Baptiste Truong of T&T. “But mastering CubX is a totally different story! Some of the higher levels are totally mind-bending, and users will need all of their skill to clear lines, score points, and keep the tetrominos from
winning the day!”

CubX, the ultra-addictive new no-cost game that is a Tetris lovers’ dream, is available from the App Store at https://itunes.apple.com/app/id954868611, and from Google Play at http://play.google.com/store/apps/details?id=com.tnt.cubx.

For additional information or media inquiries, contact Mark Johnson on behalf of
T&T at +1 408 757 0156 or press(at)appshout(dot)com.

Based in France, T&T are two brothers who love new technologies and develop games & apps for IOS & Android platforms. With a philosophy focussed on customer satisfaction, T&T actively encourage all feedback and ratings in their continual strive for perfection.