Devilishly Huge Update to All Ages Puzzler Brings All-New Features to the iPhone, iPad and Mac 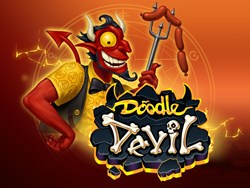 The Doodle series has a cult like following worldwide and with Doodle Devil version 2.0, the team has worked incredibly hard to deliver a truly global experience adding top quality 13 language support,

JoyBits LTD, a leading publisher and developer of interactive entertainment today announced that the element-combining all ages puzzle title, Doodle Devil™ Version 2.0, is now available on the iPhone, iPad and Mac via the Apple App Store. Doodle Devil™ is part of the Doodle series of games that has been downloaded by users over 100,000,000 million times in over 150 countries.

Doodle Devil™, the award-winning element-combining puzzle game, provides players with hundreds of elements to mix, match, and combine, to create a devilishly dark world of dastardly deeds! And with Doodle Devil™ Version 2.0, the addition of new features including 13 language support, HD graphics and new gameplay puzzles like “Demon Mode” and “Devil Slots” will provide players globally with even more countless hours of puzzle-solving delight.

"If you love Doodle God embrace your dark side with Doodle Devil," said JoyBits co-founder & CTO, Nick Kotlyarov. “The new user interface and HD graphics look fantastic on both tablets and handheld devices alike. We have also added new puzzles and gameplay modes to deliver the biggest Doodle Devil ever!”

While Doodle God was busy creating the universe, Doodle Devil was also having some fun. The same addictive, puzzle game play that made Doodle God a hit is back but with an evil twist. Discover the seven deadly sins and watch as the world crumbles at your fingertips as you create thousands of dastardly deeds. Combine fire, earth, wind & air to create demons, beasts, zombies... and much more. With Doodle Devil, being bad has never been so much fun!

“The Doodle series has a cult like following worldwide and with Doodle Devil version 2.0, the team has worked incredibly hard to deliver a truly global experience adding top quality 13 language support,” stated Paul Baldwin, JoyBits, CEO. “This is just the beginning for the Doodle series as the team is nearing completion on the all new Doodle Kingdom in the coming months!”

The power of destruction is in your hands. Being bad has never been so much fun with Doodle Devil!

For more information on Doodle Devil™ Version 2.0, please visit the official site at http://www.joybits.org or check out the trailer here http://bit.ly/1djFQKk.

Doodle Devil™ Version 2.0 is available now in the App Store:

With over 100 million downloads since its launch in July 2010, the award-winning ‘Doodle’ series of apps including: Doodle God, Doodle Devil and Doodle Farm, have become one of the world's most beloved puzzle franchises for gamers of all ages. Combining classic mix-and-match game play with clever world building mechanics, the Doodle series puts the power of creation in gamer’s hands. The Doodle series of apps are some of the highest rated apps available today, and combined, have tallied over 600 years of game play enjoyed by fans in over 150 countries. The Doodle series is available for iOS and Android devices, in addition to Windows phones, Windows8, BlackBerry10 and numerous other platforms. JoyBits is headquartered in London, England with offices in San Francisco, California and Saint Petersburg, Russia.