Lagoon Software is proud to announce that their latest creation, Maze Fiesta - the fun labyrinth game that anyone can play - is now available for free in the iOS App Store, Google Play, and Facebook. 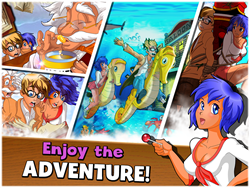 Lagoon Software is proud to announce that their latest creation, Maze Fiesta, is now available for free in the iOS App Store, Google Play, and Facebook. Maze Fiesta is a humorous labyrinth game with goofy graphics. With a whopping 700 levels, a universe of 23 worlds, and an enemy thug that could drive any player insane, the goal is to save the sexy and provocative character Tina.

The game’s cartoonish feel and engaging soundtrack make it perfect for children, though the gameplay is simple enough for challengers of ages. Master Sam, a kindly Asian grandfather, is the master of the game. It takes skill to run through them while taking down Biff the thug!

“Each character of the game is inspired by real people, this includes their personality, and each world of the game is based on an essential basic human need or desire,” says Yvelain Mazade, the CEO of Lagoon Software. “The 700 mazes puzzle of the game were created by 2 developers during 4 months, and are designed to challenge every aspect of your intelligence, and the difficulty increases at each level”.

Maze Fiesta is now available as a free download in the iOS App Store at:
https://itunes.apple.com/app/id960626600

A dedicated Android version is also available via Google Play at:
https://play.google.com/store/apps/details?id=air.com.lagoonsoft.mf

A web based Facebook version is available at:
https://apps.facebook.com/mazefiesta/

The tiny island of Mauritius is home to birds, giant tortoises, lemurs as well as the wild and creative Lagoon Software team. Lagoon Software has been working for 10 years to create games for their fans. From their little island home in the middle of the Indian Ocean, they pursue their passion to develop games that are fun for their players. Since starting as a lone designer in 2006, the founder has been joined by 10 passionate game developers and artists from Mauritius and other countries.