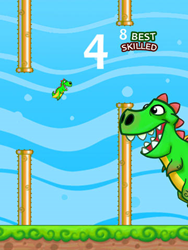 After launching Splashy Dino, the feedback we received from gamers around the world was incredibly positive, as people fell in love with the app right away

Bearing some basic resemblance to Flappy Bird – except that it’s not exceedingly difficult to play and the graphics are substantially better – Splashy Dino challenges gamers to tap their screen as often as necessary to flap a quaint cartoon dinosaur’s wings, and help it fly safely past an endless array of pipes that stick out from above and below. Tapping takes the dinosaur up, no tapping sends the dinosaur down, and forward momentum happens on its own – which is one of the reasons why playing Splashy Dino is fun rather than frustrating.

And now in version 2.0, gamers can enjoy a range of new features including:

“After launching Splashy Dino, the feedback we received from gamers around the world was incredibly positive, as people fell in love with the app right away,” commented Alex Ledovskiy of Iceman Softworks Game Studios. “And now we’re pleased to launch version 2.0, which features plenty of additions and enhancements.”

For further information or media inquiries, contact Mark Johnson on behalf of Iceman Softworks Game Studios at +1 408 757 0156 or press (at)appshout(dot)com.

Led by brothers Alexander and Alexey Ledovskiy, Iceman Softworks Game Studios is an agile mobile game development firm that is dedicated to bringing joy to gamers across the world. The firm, which was founded in 2011, works in small teams comprised of talented cross-functioning individuals in order to leverage the benefits of spontaneity, creativity and speed, while ensuring world class quality."