Spy Hidden Camera Detector is an innovative, elegant and essential solution to the growing problem of illicitly placed hidden cameras. The app replaces gadgets that sell for over $100, and features both manual and automatic detection modes. 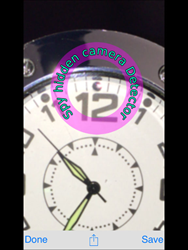 People who want to reclaim their privacy and security from the growing number of cyber criminals, snoops and voyeurs out there armed with hidden cameras, should head straight to the App Store and get the recently-updated app Spy Hidden Camera Detector.

In manual mode, users who suspect the existence of a hidden camera simply scan the room with their iPhone. When they detect something suspicious, they tap their screen and place a marker. When finished scanning, they point their device at the pre-marked areas and wait a few seconds as the app turns their camera’s flash on and off. Ultimately, this process reveals one of two overlays: yellow, which suggests that the surface of a tiny and concealed object is likely metallic or glass-like; and cyan, which suggests that the surface could be a camera lens.

Automatic mode -- which has been improved in the latest version 5.0 – attempts to accomplish the same objective as manual mode. However, instead of users scanning the room themselves, the app takes over and puts a marker (or markers) where it detects a camera lens may be present. Users can zoom their camera in/out and change the distance/angle of their device based on the size of the room, and the type of results they are getting.

“Essentially, Spy Hidden Camera Detector has all of the features and functions of anti-spy gadgets that often cost over $100 from Amazon and other retailers,” commented a spokesperson at ALP Digitech. “At the same time, since people typically carry their iPhone wherever they go, they always have app with them and can therefore stay one step ahead of people who want to invade their privacy and security.”

Version 5.0 of Spy Hidden Camera Detector is available now at a promotional price of $0.99 from the App Store at https://itunes.apple.com/app/spy-hiddencamera-detector/id925967783.

Spy Hidden Camera Detector is compatible with all iOS devices with a camera flash; this includes all all iPhone’s and the iPad Pro.

For all other information or media inquiries, contact Mark Johnson on behalf of ALP Digitech at +1 408 757 0156 or press(at)appshout(dot)com.

About ALP Digitech
Located in Vancouver, Canada, ALP Digitech is about peculiar and clever apps that push the envelope of what's possible. From hidden camera detector app to chatbot app that stores your personality for your grandchildren, ALP Digitech is always tinkering and forging.