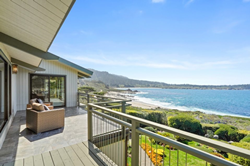 Betty White’s home has ocean and sunset views and is for sale at $7.95 million.

“Madonna Lists The Weeknd House Fast”
Just one year after Madonna bought The Weeknd’s LA mansion for $19.3 million, she has put it on the market at $25.995 million. Built in 2016 with 12,547 square feet spread across three acres, the seven-bedroom, 11-bath property includes a two-bedroom guest house, a large barn and a five-car auto gallery.

“‘Dallas’ Star Linda Gray’s Oak Tree Ranch for Sale”
Linda Gray, well known as Sue Ellen Ewing, the vodka-tipsy wife of Larry Hagman’s character, J.R. Ewing, in the long-running soap opera ‘Dallas’, is selling her much-loved Santa Clarita, California ranch where she has lived for almost 50 years. Only 35 minutes from Beverly Hills, the gated three-acre equestrian estate has numerous structures and amenities such as stables for horses, a tack room/barn, north-south tennis court, large swimming pool with spa, organic gardens, a koi pond, and even a chicken coop. It is priced at $2.995 million.

“Betty White’s Carmel-by-the-Sea Home”
The Carmel-by-the-Sea home that Betty White owned since the 1980s is for sale at $7.95 million. Betty and game show-host husband, Allen Ludden, had the 3,621-square-foot home built in 1981 on a high bluff overlooking the ocean. Allen died shortly after the home was built and Betty died at the end of 2021.

“Thirty Years After the Film, ‘Basic Instinct’ Home Is For Sale”
Carmel, California has been the backdrop for many films, including 'A Summer Place' and 'Play Misty for Me'. It was also seen in the 1992 thriller, 'Basic Instinct', with Sharon Stone and Michael Douglas and the HBO series, 'Big Little Lies', with Reese Witherspoon and Nicole Kidman. Thirty years after the premier of 'Basic Instinct', the Carmel cliffside home is now for sale at $29.625 million.

“Cindy Crawford’s Former Malibu Home Listed at $99.5 Million”
Cindy Crawford was one of the most popular and well-known supermodels of the 1980s and ‘90s. She appeared on the cover of over 500 magazines, including Vogue, Elle and Cosmopolitan and walked the runway for such brands as Versace, Ralph Lauren, and Dolce & Gabbana. Known for her “beauty mark” or mole above her lip, she was consistently ranked as one of the most beautiful women in the world. The cliffside Malibu estate that once belonged to the supermodel was recently listed for $99.5 million - one of the highest-priced homes in the state.

“Katy Perry Puts Another Beverly Hills Home On Market”
Katy Perry sold her Beverly Hills guest mansion last year for almost $7.5 million, and she now is hoping to also sell her main Beverly Hills mansion. Katy is asking $19.475 million for her 5,427-square-foot home that she bought in 2017 for about $18 million. The late-1950’s era home is set at the end of a quarter-mile-long driveway with loads of lush landscaping throughout the property.

“Mark Wahlberg’s Home Has Everything, Including Football Team-Size Gym”
After years of adding to and improving his Los Angeles Beverly Park mansion, Mark Wahlberg has listed the 30,500-square-foot home for $87.5 million. Some of the home’s features include a five-hole golf course, a tennis court, skate park and a workout room big enough to accommodate Mark’s beloved New England Patriots football team.