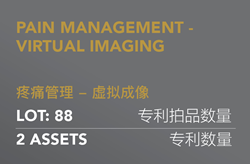 The patents in this auction would be of interest to medical device companies, AR/VR device manufacturers, AR/VR software companies.

The patents in lot 88 relate to methods and systems directed to capturing data associated with intact portions of a missing limb, generating a three dimensional virtual image of the missing limb, and displaying the image to an amputee such that the missing limb appears intact. By utilizing augmented and/or virtual reality (AR/VR) to create what appears to be an intact limb, and taking actions such as fading or shrinking the limb over time, the amputee's brain adjusts to the absence of the limb, thereby reducing phantom pain and sensations.

The patents in this auction would be of interest to medical device companies, AR/VR device manufacturers, AR/VR software companies.

To request bidder credentials or for further information on this auction or other auctions on the Ocean Tomo Bid-Ask™ Market, contact Layna Guo at LaynaGuo(at)OTI(dot)com or 1-312-327-8179.