New features bring the high-availability of a cluster combined with the performance of a single instance, as well as query optimizations that see up to 30x performance improvements 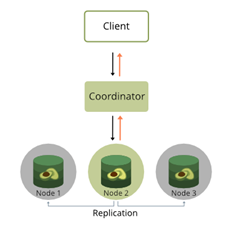 A database created with OneShard enabled is bound to a single database server node, but still replicated synchronously to additional nodes

In conversations with our community, we found many of our users expressed the need for the high-availability and fault-tolerant benefits of a cluster, but they didn’t necessarily want to scale horizontally and sacrifice performance.

A database created with OneShard enabled is bound to a single database server node, but still replicated synchronously to additional nodes. This ensures the high-availability and fault tolerance of a cluster setup and performance similar to a single instance, as well as the possibility to run transactions with ACID guarantees. OneShard is ideal for use cases with graph traversals and JOIN-heavy queries, as well as multi-tenant applications.

“In conversations with our community, we found many of our users expressed the need for the high-availability and fault-tolerant benefits of a cluster, but they didn’t necessarily want to scale horizontally and sacrifice performance,” said Claudius Weinberger, CEO and co-founder of ArangoDB. “With the release of ArangoDB 3.6, we are pleased to offer developers a solution with OneShard, as well as a plethora of additional performance improvements.”

The additional features in ArangoDB 3.6, included in both the Community and Enterprise editions, are:

Parallel execution of AQL queries: Increase cluster AQL query speed by 40%
ArangoDB 3.6 includes the ability to parallelize work in many cluster ArangoDB Query Language (AQL) queries when there are multiple database servers involved, increasing speedups of the queries by up to 40%.

Early pruning of non-matching documents: Query improvements up to 50% faster
ArangoDB 3.6 evaluates FILTER conditions on non-index attributes the same time it does a full collection or index scan. With the scanning and filtering happening concurrently, queries that filter on non-index attributes will run faster. In testing ArangoDB saw performance improvements up to 50%.

Additional improvements that increased query speeds up to 50% include UPDATE and REPLACE query optimizations, and faster date calculation operations.

Learn more
For more details on ArangoDB 3.6: Read the blog
To join a webinar for a more in-depth overview of the new features in ArangoDB 3.6: Register here
To get started with ArangoDB Oasis: Sign up for a free trial

ArangoDB Accolades
ArangoDB is listed among the top three graph databases, the top ten document stores and ranks in the top seven search engines on db-engines.com. In addition, ArangoDB was selected as the leading graph database for 2020 on G2 Crowd (4.8/5 stars) for the second year in a row and Gartner Peer Insights Customers voted ArangoDB among the best rated operational database management systems with 4.7/5 stars and 86 reviews.

About ArangoDB
One engine. One query language. Multiple data models. With more than 7 million downloads and over 9,000 stargazers on GitHub, ArangoDB is the leading open source native multi-model database. It combines the power of graphs with JSON documents, a key-value store, and a full-text search engine, enabling developers to access and combine all of these data models with a single, elegant, declarative query language.

Simplifying complexity and increasing productivity is the mission of ArangoDB Inc., the company behind the project. Founded in 2014, ArangoDB Inc. is a privately-held company backed by Bow Capital and Target Partners. It is headquartered in San Francisco and Cologne, Germany with offices and employees around the world. Learn more at http://www.arangodb.com.