Officially licensed from Tozai, Inc. and Irem Software Engineering Inc., the arcade versions of the R-Type Series will soon be added to the iiRcade Store 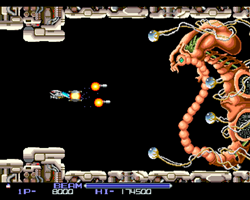 iiRcade Inc., the ultimate connected arcade machine that allows gamers of all ages to play their favorite retro and modern games in arcade style at home, is adding R-Type and R-Type II as well as Armed Police Unit Gallop, officially licensed by Tozai, Inc. and Irem Software Engineering Inc., to the iiRcade platform.

R-Type is a horizontal-scrolling shooter arcade game developed and released by IREM in 1987. Players control a star ship called the R-9 "Arrowhead" and set out to destroy the Bydo, a powerful alien race bent on wiping out all of mankind.

R-Type was the first game to run on IREM's 16-bit M72 arcade system and was well-received by most gaming critics for its graphics and addictive gameplay.

The sequel, R-Type II, is also coming to the iiRcade Store and was released in 1989. R-Type II features the R-9C ship, which is an improved version of its predecessor game's ship, the R-9, two new types of weapons being added, the Search Laser and Shotgun Laser.

Armed Police Unit Gallop is a spin-off title from the R-Type series that was released in the arcades in 1991. The player pilots an R-Type fighter in this horizontal shooter tasked with hunting down autonomous vehicles driven berserk by the Bydo, dubbed "Mad Cars”.

“We’re really excited to bring the arcade versions of the R-Type series to iiRcade,” said Jong Shin, founder & CEO of iiRcade. “The classic horizontal-scrolling shooters are always lots of fun to play on an arcade.”

All games are officially licensed and available at affordable prices, and new titles are continuously added to the growing iiRcade store library. The iiRcade Store can be accessed on phones or via browser on PC or Mac through the iiRcade store link.