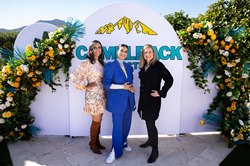 "Camelback Productions is Arizona’s first female- and South Asian-owned film production and entertainment company. It is also the first company of its kind with a focus on South Asian storytelling."

Award-winning commercial real estate and land consultant, Anita Verma-Lallian announced the creation of Camelback Productions, Arizona’s first female- and South Asian-owned film production and entertainment company. It is also the first company of its kind with a focus on South Asian storytelling. The announcement follows Arizona Governor Doug Ducey’s $125 million film tax credit for film and TV production that was introduced in July 2022.

Named after the iconic Phoenix mountain, Verma-Lallian wants to see Camelback Productions associated with much more than producing great content. She wants it to be synonymous with perseverance and mental strength, a symbol for the South Asian community to push toward their goals and desires.

“There has been a major push to see minority groups represented in the media over the past few years,” says Verma-Lallian. “I want to see more South Asians represented; I want my children to see themselves when they watch TV. I want my daughter’s dream to become an actress to become a reality. Skin color shouldn’t be a barrier to that.”

The event opened with remarks from Phoenix Mayor Kate Gallego, who has served as the city’s 62nd mayor since 2019. Investors and supporters were treated to a first look at what’s ahead for Camelback Productions.

“Congratulations to Camelback Productions on a successful launch!” said Gallego. “Arizona has a long history of fostering entrepreneurship and innovation. I welcome Camelback Productions to the greater Phoenix community and am confident the team will attract some of the country's top talent to the Valley.”

Camelback Productions is Verma-Lallian’s first venture into the film industry. She is known for providing full concierge services for land seekers and developers of all types of sites and assists investors in discovering viable properties in the Phoenix area through her company, Arizona Land Consulting, but has decided to expand her horizons due to the lack of diversity in the industry.

You can learn more about Camelback Productions at https://www.instagram.com/camelbackproductions/.

ABOUT CAMELBACK PRODUCTIONS
Camelback Productions is an Arizona-based film production and entertainment company founded in 2023 by Arizona Land Consulting Founder and CEO, Anita Verma-Lallian. Named after the iconic Phoenix mountain, Camelback Productions was created to give a platform to South Asian talent and creators. You can learn more at https://www.instagram.com/camelbackproductions/.