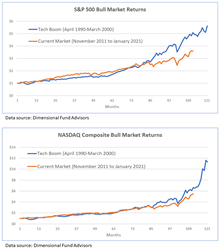 The Dow will rise to 40,000 in the next 12 months. That’s not so much a forecast as it is a warning. Sure, a rising stock market may sound exciting, but too much of a good thing can pose eventual problems. And, if history is any guide, a quick jump to 40,000 is very possible, but so is a subsequent correction that could take the Dow to 18,000.

Lining up the charts of the last ten years of the Tech Boom (April 1990 to March 2000) with the current bull market show quite a few similarities, particularly when looking at the tech-heavy NASDAQ Composite Index (see Figure 1). Perhaps any two significant bull markets would appear similar, but the Tech Boom and the current run are somewhat unique in that they both earned large gains over many years, experienced sharp pullbacks, and then went on to “parabolic” gains in the sectors most leveraged to the bull run.

The Tech Boom period experienced a 19% pullback in the S&P 500 in 1998 when Long Term Capital Management imploded. The current market had the COVID drawdown in early 2020. Both were sharp, but short-lived contractions. If we assume that today’s market is going to follow the pattern of the Tech Boom, there could still be quite a bit more upside, driving the Dow up to 40,000. The NASDAQ would have even further to run to catch up to the Tech Boom, which could result in 75% upside from here.

The similarities between our current market environment and the Tech Boom are not just limited to basic technical analysis. There are uncanny comparisons in many respects. These have been well-noted in the popular and financial media. And while the day-trading tax drivers of the 1990s may have given way to today’s Robinhood traders, the mania is the same. Today’s profitless and sometimes non-revenue generating IPOs, SPACs, and unicorns are like the pie-in-the-sky business models of Pets.com and others in the 1990s. The list goes on, and the impact on the market feels similar: speculative excess in both periods.

How, when, and where does it end? Of course, no one knows, but it doesn’t seem like the end is near. An additional $1.9 trillion of additional government stimulus seems likely to pass in the near term, as well as promises of a large infrastructure bill down the road. Also, historically loose monetary policy by the Fed and other central banks ensures ample liquidity to keep the capital markets afloat. These augur well for additional stock market gains in the short-term.

Longer-term, the outlook is not so rosy. By many measures, such as the CAPE ratio, the stock market is already quite highly valued. There are certainly relative bargains in the market today, such as global value stocks, but overall market valuations are at some of the highest levels in recorded history. Additional gains, particularly a further 30% gain for the Dow, would put us into nose-bleed territory. Valuations of that level are unprecedented except for the Tech Boom, which ended quite badly.

Unfortunately, a similar fate is likely today. If the market does run up to 40,000, a subsequent drop to 18,000 would likely be unavoidable. The stock market declined by over 50% from its high in 2000 to its low in September 2002. Despite near-term catalysts for further gains, the longer-term impact of today’s economic policies and proposals is far less promising.

On the bright side, amid all the stock market excess, there are signs that a rotation away from the largest tech stocks is under way. Smaller-cap indices have outperformed recently, and value stocks are rebounding from their multi-year funk. However, it is far from certain that these trends are sustainable. If they continue, a more moderate downturn is likely with lower, albeit positive, returns for the next decade. However, if the lunacy of the 1990s continues in today’s market, we’re likely in for a wild ride.