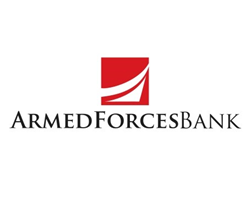 Armed Forces Bank (AFB), founded and headquartered in Fort Leavenworth, Kansas, is a full-service military bank committed to serving those who serve since 1907.

Our partnership with A Million Thanks is a natural extension of our long-standing commitment to support the bravery and dedication of our military service members and their families.

Armed Forces Bank (AFB), a full-service military bank committed to serving those who serve since 1907, today announces a new partnership with A Million Thanks to send thank you letters to military members serving around the world. A Million Thanks is a national organization that collects and distributes letters of support and thanks directly to active duty, reserve and veteran military men and women. AFB was recently named the official financial services partner for A Million Thanks.

Beginning May 17 during National Military Appreciation Month, AFB branch locations will become official A Million Thanks “Send A Letter” collection sites with drop boxes available for bank clients and community members to send notes of appreciation. Drop boxes will be available in each of AFB’s 26 locations across the country and in 80 branch locations of Academy Bank, AFB’s sister bank.

“Our partnership with A Million Thanks is a natural extension of our long-standing commitment to support the bravery and dedication of our military service members and their families,” said Don Giles, President of Armed Forces Bank. “We’re honored to join forces with the inspiring mission of A Million Thanks by offering our clients and the communities we serve a convenient way to send notes of gratitude directly to those who are protecting and defending our country.”

Armed Forces Bank will also offer an opportunity to send digital messages via its website at http://www.afbank.com/message-your-appreciation/a-million-thanks. Since 2004, A Million Thanks has collected and distributed nearly 11 million letters to military service members.

“Now with the Armed Forces Bank partnership, we have the opportunity to significantly expand our efforts with our ‘Send A Letter’ drop boxes in their branches across the country,” said Shauna Fleming, founder and CEO of A Million Thanks. “A handwritten letter is a simple, but powerful gesture that anyone can do to express his or her appreciation for our military’s courage, sacrifice and dedication. The response to the letters is often quite emotional. The letters provide a morale boost, not just to one service member, but often to the entire unit.”

Armed Forces Bank’s Long-Standing Military Commitment
With its headquarters in Fort Leavenworth, Kansas, AFB has been dedicated to serving military service members and their families for more than 110 years. Approximately 35% of AFB Associates have some type of military affiliation either by spouse, retired themselves or their children. AFB’s dedication to the military has included many leadership initiatives and awards.

“At Armed Forces Bank, we celebrate the contributions and sacrifices made by military spouses. They are the backbone of military families. As a spouse of a 20-year Army retiree, that hits home,” said Jodi Vickery, EVP and Director of Military Consumer Lending. “Our partnership with A Million Thanks gives us another important way to actively express our gratitude for the many sacrifices military men and women endure.”

In support of Military Appreciation Month in May, AFB associates around the country are embarking on Random Acts of Kindness to show appreciation to servicemembers, such as spontaneous help to pay for a fill-up at the gas pump or handing out gift cards to make groceries a little less expensive for service members and their families.

“Every day, it is an honor to serve our active and retired military service members and their families in every way we can,” Giles added. “No matter where they are stationed or deployed around the world, AFB is dedicated to expressing our appreciation by making everything from banking solutions to financial advice valuable, convenient and personal.”

About Armed Forces Bank
Armed Forces Bank (AFB), founded and headquartered in Fort Leavenworth, Kansas, is a full-service military bank committed to serving those who serve since 1907. As part of a family of banks with over $1.2 billion in assets, AFB provides affordable, personal and convenient banking and financial services to both active and retired military and civilian clients in all 50 states and around the world. Armed Forces Bank has more on-base locations than any military bank in the country with 26 locations. Armed Forces Bank is a wholly-owned subsidiary of Dickinson Financial Corporation, a $3.5 billion bank holding company headquartered in Kansas City, Mo. AFB’s sister bank, Academy Bank, is a full-service community bank with over 80 branch locations in Arizona, Colorado, Kansas and Missouri. For more, visit http://www.afbank.com.

About A Million Thanks
Founded in 2004, A Million Thanks is a 501(c)3 non-profit organization dedicated to supporting the U.S. Military. A Million Thanks provides support and appreciation to our active and veteran military men and women through sending letters and granting betterment of life wishes, as well as providing higher education scholarships to their children. For more, visit http://www.amillionthanks.org.