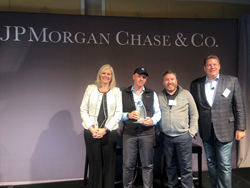 JPMorgan Chase inducting Armory into the Hall of Innovation

In describing the selection of Armory for this recognition, JPMorgan Chase's Head of Core Engineering & Enterprise Architecture, Stephen Flaherty, said, "We started partnering with Armory to support the shift towards more frequent deployment cycles and continuous delivery in a multi-cloud environment. Armory provided immediate value with technical expertise, enterprise-grade software, and connectivity to the broader continuous delivery community. We are seeing a significant increase in both frequency and volume of releases with Armory’s integration."

"We are proud of this recognition and of our successful partnership with JPMorgan Chase," said Daniel R. Odio, CEO at Armory. "Armory is enabling innovative companies like JPMorgan Chase to dramatically improve the quality and speed of their software deployments and thus deliver innovation from code to cloud much more effectively. This award recognizes not only Armory’s contribution but also those of all the members in the Spinnaker community, for which we are deeply grateful."

Armory will showcase new enterprise capabilities in Spinnaker at the upcoming Spinnaker Summit taking place November 14-16 in San Diego. Attendees will have the opportunity to learn more about Armory's award-winning product capabilities and services through presentations, demonstrations, and a keynote address by Armory's CTO, Isaac Mosquera.

Spinnaker is an open source, multi-cloud continuous delivery platform for releasing quality software quickly and efficiently. It was developed and open sourced by Netflix and Google and has been tested in production by hundreds of teams over millions of deployments. It is the only open source continuous delivery platform with active contribution from the major cloud providers, including Amazon Web Services, Google Cloud, Microsoft Azure, Pivotal, and more.

Now in its third year, Spinnaker Summit focuses on the rapid adoption of the Spinnaker open source platform as a key enterprise choice for software delivery and management. The event brings together developers, architects, delivery managers, and technology leaders, each of whom is committed to advancing development and adoption of the fast-growing continuous delivery platform.

Armory is the company driving modern digital transformation with its enterprise version of Spinnaker. Armory's scalable, flexible, and secure platform automates software delivery, enabling software teams to ship better software, faster. The core of Armory’s platform is powered by Spinnaker, the continuous delivery platform developed and open sourced by Netflix and Google to help companies quickly and safely deploy software into multiple clouds. Armory builds on open-source Spinnaker’s foundation, adding proprietary features for bolstered enterprise scale, along with 24x7 enterprise-grade support. Armory's platform is trusted by Global 2000 customers in financial services, technology, retail, healthcare, and entertainment. Armory is also a sponsor of, and contributor to, the Continuous Delivery Foundation (CDF), the vendor-neutral home of the fastest-growing projects for continuous delivery.