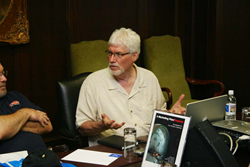 Robbins, who has trained C level execs in the use of Social Media, is shown here conducting an introductory program at the Ballantyne Hotel and Resort in Charlotte, NC.

It is a great accomplishment for us to start 2015 with this kind of momentum Chuck Robbins, Founder aro marketing

Since 2008 businesses of all types have been challenged economically and small businesses have really been through the ringer. "The business of marketing has completely changed in the last 10 years and adapting to that change has been a real test in flexibility," said aro owner for 21 years, Chuck Robbins. "It is a great accomplishment for us to start 2015 with this kind of momentum," he continued.

The success of aro in the past few months can be attributed to using the same tools aro provides for their clients for ourselves. Social Media Content on LinkedIn, Facebook, Twitter, YouTube and Pinterest have all driven growth in the Fourth Quarter. The projects, though all in the aro "wheelhouse", are different in each case:

Parsons Summa. aro had worked with attorney Phil Summa on and off for many years at a different firm. When Kevin Parsons and Phil decided to combine their practices under one roof, aro was chosen to build their website and then create some public relations around the new firm. In the last 30 days aro has managed to drive 10 times the normal web traffic and added some earned media placements for a new staffer. http://parsonssumma.com/

A Handbook for Life Seminars. Richard London, Founder has worked with aro since 2009. London is concentrating on his strategy for 2015 and how to manage his ongoing public relations efforts. aro has constructed media databases and is currently pitching various story ideas as well as managing his web activity. http://www.ahandbookforlife.com/

Simons Chiropractic. When aro was first approached. There were prominent web issues. The Simons website was completely off line and they were introducing an important new Therapy to their practice. aro got their existing web site back live in 24 hours and then built them a new site over the next 60 days featuring the new equipment. http://www.dirksimons.com/

Netsafe Solutions. aro engaged with George Hayner and Derek Schott originally to build a better Social Media Strategy. Their current website did not contain any content that reflected the Netsafe philosophy or it's personality. We refreshed the web content and are about to build a new social media strategy around that content which ties the owner's interest in triathlons to Netsafe's delivery. http://www.netsafesolutions.com/

Finally, Magneceutical Health has chosen aro to implement their Quick2Brand campaign for a crowdsourcing project to raise money for Military Veterans struggling with Pain or PTSD. The Indiegogo crowdsource campaign launched on January 29, 2015. and has been one of the biggest successes since the debut of the Quick2Brand product 5 years ago.

aro has 3 people and uses multiple sub contractors, many of whom have worked with the company for 20 years plus. For more information contact Chuck Robbins or visit http://consultaro.com Clients have included Joe Gibbs Racing, A Handbook for Life, Viance, The Ultimate Gift, Panamonte Brands, Metropolitan Ballroom, Maverick Entrepreneurs, Simons Chiropractic, The Johnson Group and more. For shorter consulting calls you can schedule a call with Robbins directly at: https://clarity.fm/chuckrobbins

Media coverage is an important element of every "Power News Blast" from aro. Here a client is interviewed for a national TV program

Dirk Simons of Simons Chiropractic became an aro client in 2014.