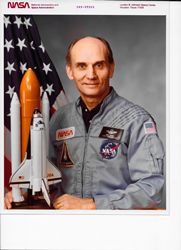 The art installation will be a tribute to Jake Garn’s long life including his career in aviation, aeronautics and politics.

An art installation tribute celebrating Utah’s first astronaut and retired U.S. Sen. Jake Garn will be unveiled during a special dedication ceremony at the Salt Lake City International Airport on Dec. 3 at 2:30 p.m.

The art installation will be a tribute to Jake Garn’s long life including his career in aviation, aeronautics and politics and is part of the Salt Lake City International Airport’s art open house from 2 p.m.-5 p.m. on the same day.

Born in Richfield, Utah on October 12, 1932, Edwin Jacob “Jake” Garn was the first member of congress to fly in space. Garn was elected to the Senate in 1974 and served three terms. He also flew as a payload specialist on STS-51D Discovery from April 12-19, 1985 and served as a pilot in the U.S. Navy and in the Utah Air National Guard, retiring as a full Colonel in April 1979. He was later promoted to the rank of Brigadier General in 1985.

Garn recently celebrated his 90th birthday with his friends and family. Garn has 7 children, 30 grandchildren and 21 great grandchildren. According to Garn, his family is most important to him, regardless of other accomplishments.

To learn more go to JakeGarnLegacy.com.