Arthur L. Stevens’ new book “Well of Shadows: A Shadow Panther Novel 3” is the third book in a sci-fi fantasy saga about the world-altering fight between good and evil

Recent release “Well of Shadows: A Shadow Panther Novel 3” from Page Publishing author Arthur L. Stevens is a suspenseful science fiction fantasy tale in which the villain, the Deceiver, breaks free and attempts to gain more power to be unmatched, even from Gods. 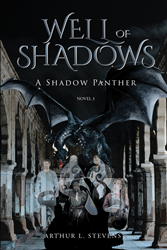 Arthur L. Stevens, a disabled veteran from the Marine Corps and the Army National Guard who began writing in 1996, has completed his new book “Well of Shadows: A Shadow Panther Novel 3”: an exhilarating tale about the epic battle between good and evil in an extraterrestrial world.

Arthur writes, “Despite those problems, her main concerns were largely for Staszu at the moment. She could not only help wondering what had become of him but also, more importantly, what, if anything, she could do to help. Calling one of the attendants in the hall, she immediately dispatched him to have the leaders of the magi brought before her this afternoon. First, she would find out what was known about these strange people who took her husband. Then they would explain to her why they had failed to inform her about her son’s new field of study. This still did not fix the largest problem her husband had created for her.”

The first race known as the Odcisk have had a long-time enemy called the Deceiver. After several millennia, the Deceiver has broken free and is attempting to gain immense power. Their avatar Staszu is missing, he has been taken by another race. The kingdoms are on the verge of war since the alliances that Staszu has created are breaking apart.

Meanwhile, the Deceiver is linking the Well of Shadows to the Spring of Life obtaining power to rival the gods. Readers will follow along on the edge of their seats, wondering if the gods will be destroyed by the Deceiver, ending the existence of this alien world, or if the hero Staszu will overcome the obstacles and defeat the Deceiver once and for all.

Readers who wish to experience this stimulating work can purchase “Well of Shadows: A Shadow Panther Novel 3” at bookstores everywhere, or online at the Apple iTunes Store, Amazon, Google Play, or Barnes and Noble.