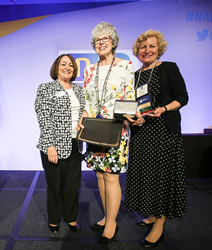 “One of the most important and most pleasant functions of a national association is to honor those who have provided the vision, hard work, and leadership to make the world a better place, and Ray Doughty is just such a person.”

“One of the most important and most pleasant functions of a national association is to honor those who have provided the vision, hard work, and leadership to make the world a better place,” said Mike Blakeslee, Executive Director of NAfME. “Ray Doughty is just such a person, and all of us at NAfME are delighted to add his name to the roll of Lowell Mason Fellows.”

Ray Doughty was recognized with this honor during the NAfME National Leadership Assembly in June, in Washington, DC. Due to weather conditions in his state, he could not accept the distinction in person, but a ceremony is planned on August 3 to honor Ray Doughty in person with his Lowell Mason medallion. Christine Fisher, NAfME National Executive Board member and South Carolina resident, along with Patti Foy, South Carolina Music Educators Association (SCMEA) Executive Director, accepted on Ray’s behalf at this past June’s event.

“Along with his teaching and conducting,” Sanz continued, “Ray was a state leader for music and arts education, serving as the music consultant for the South Carolina Department of Education beginning in the 1980s. During his tenure at the state, Ray created statewide music frameworks—a full seven years before the first national standards were released in 1994. He went on to create the Arts in Basic Curriculum program at Winthrop University, which, to this day, continues to provided $1.2 million in grants annually to South Carolina schools—funds used solely to support music and arts education. He also created a two-week Curriculum Leadership Institute in the arts that continues to this day—building leaders of the arts for years to come.”

“Ray not only kept music teachers up on best practices on how to implement the South Carolina Framework for Music Education,” added Christine Fisher, “he also emphasized the importance of membership and leadership in SCMEA and MENC [now NAfME]. He strongly encouraged us to attend the South Division and National NAfME conferences. We listened, attended, and were better music teachers because of it.”

“Although Ray retired from full-time employment more than 20 years ago,” shared Patti Foy, “the South Carolina music and arts education communities have remained vibrant as a result of his pioneering work. Ray has been a champion and role model for music teachers all over the United States. We should recognize his considerable contributions to music education through his induction into the Lowell Mason Fellows.”

The prestigious award is named for educator, musician, and composer of more than 1,600 hymn tunes, Lowell Mason, who is considered to be the father of public school music education in the United States. He has been credited with introducing music instruction to American public schools in the 19th century, and with establishing teacher training in music education. In 2002, the importance of his contributions to music education inspired NAfME to create the Lowell Mason Fellows award.

Lowell Mason Fellow designations also provide an opportunity to support the efforts of NAfME through the donation made in the honoree’s name. This donation goes to NAfME to support future generations of music educators through the organization’s programs. Individuals or groups (corporations, universities, foundations, student organizations, etc.) may fund designations.

Read more about the Lowell Mason Fellows distinction and past recipients of the honor here: bit.ly/LowellMason.

National Association for Music Education, among the world’s largest arts education organizations, is the only association that addresses all aspects of music education. NAfME advocates at the local, state, and national levels; provides resources for teachers, parents, and administrators; hosts professional development events; and offers a variety of opportunities for students and teachers. The Association has supported music educators at all teaching levels for more than a century. With more than 60,000 members teaching millions of students nationwide, the organization is the national voice of music education in the United States.