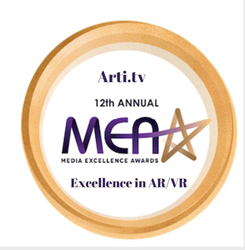 What impressed us about Arti is their groundbreaking technology approach that makes it easy for broadcasters and other video producers to create and deliver engaging AR content outside the studio.

Arti, the first cloud-based, no-hardware augmented reality solution for broadcasters and video producers, was named the winner in the AR/VR category of the 12th annual Media Excellence Awards. The MEAs honor leaders, game changers, and innovators, as well as the best companies to watch in mobile technology and entertainment.

“We’re honored to receive this award recognizing our innovative no-hardware, cloud-based approach to delivering broadcast-quality AR,” said Yaron Zakai-Or, Arti Co-founder & CEO. “We are humbled that the MEA judges chose Arti among such an impressive array of global nominees and we’re excited to introducing the broadcast industry to Arti next month at the NAB conference in Las Vegas.”

Unlike traditional AR solutions, which require costly on-premise hardware and can only be used by dedicated AR design teams in a studio, Arti is a software-only, cloud-based AR platform that can be used on-the-go. With Arti, all video content producers need is a camera, a laptop, and an internet connection to create engaging AR videos that differentiate their content and keep audiences watching.

“Our panel of expert judges is always looking for innovation of the highest level in mobile entertainment, technology, and media,” said Sarah Miller, CEO, Axis Entertainment and Founder, Media Excellence Awards. “What impressed us about Arti is their groundbreaking technology approach that makes it easy for broadcasters and other video producers to create and deliver engaging AR content outside the studio. It provides new flexibility while also lowering production costs, so it’s a winning one-two punch.”

Arti democratizes the use of augmented reality and real-time graphics for engaging storytelling everywhere. It’s the first software-only, cloud-based AR platform that enables embedding 3D objects into the scene without changing the production workflow. Using Arti’s Intuitive UI, both experienced AR designers and newbies can add, create or import 2D and 3D content and add it to their video in a matter of seconds, providing exciting new opportunities to tell engaging stories with AR and data at live events, on-location, in-studio – everywhere. Learn more at arti.tv and follow @tv_arti on Twitter.