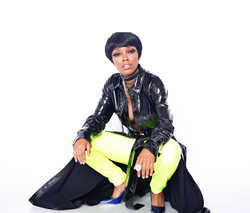 I will use my gifts to raise awareness and support the fight against social injustice .”

6X Entertainment artist Tia P., re-releases the single and exclusive remix video of the Beatles' Classic “Come Together” featuring artist B. Slade and a host of industry friends, which is slated for release on September 1st with the official rollout for the (R2V) voter campaign on September 4th. Tia P. is most known for her time on BET’s hit music competition series “The Next Big Thing,” and is also an actress who has been seen in several national commercials, i.e., Sprite Feat. LeBron James, Welcome to California and a Pepsi Commercial featuring Pop sensation, Tori Kelly. She is using her musical talents to support The Remember To Vote in November (R2V) voter registration campaign with the launch event taking place in Tia P’s hometown Inglewood, CA. 6X Entertainment’s R2V campaign is a two-fold initiative. The first priority of the campaign is to raise awareness and provide resources to ensure voters are educated.

Notably, Tia P. performed a freestyle on Sway Calloway’s SiriusXM's "Sway in the Morning" while in NYC. Tia P. continues to excel in her quest to make history and leave her mark as a fierce Emcee and a force to be reckoned with in this new age of Rap/Hip Hop. Tia P. has not stopped making waves in music by first being featured alongside Mary J. Blige on the song, "Feel Good" by legendary Clark sister Jacky Clark-Chisholm. She has stayed very active in securing song placements on shows and movies like "Black AF", "Shameless and more on Netflix. Tia P. has also written the theme song for Tammi Mac's Radio Show on KJLH and web series on Fox Soul TV and her song "Get Loud" is the player intro song for the L.A. Sparks.

Tia P.’s activism has been seen in the various local protests in Los Angeles demonstrating her support for equal justice among people of color. The release of Come Together sends a clear message that uniting is the only way change will be effective. She is a proud Howard University graduate who is using her platform to support social justice. Tia P. states, “A country divided cannot stand, and America is indeed no exception. We must come together and use our God given right to save the soul of America. I will use my gifts to raise awareness and support the fight against social injustice.”