ArtsWestchester CEO Janet Langsam is commemorating President’s Day with the following editorial about a founding father and our nation’s past and present relationship with truth. 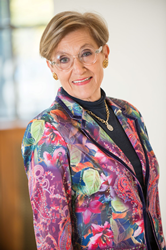 "There were no alternative facts. In today’s world, we have allowed the normalization of lies, and it has been to our peril.," said ArtsWestchester CEO Janet Langsam

ArtsWestchester CEO Janet Langsam of ArtsWestchester is commemorating President’s Day with the following editorial about a founding father and our nation’s past and present relationship with truth.

When I was a kid growing up in Far Rockaway, I was inquisitive, or so I’m told. Even in my stroller days I would ask each person who stopped to chat: “Who you?” One gentleman had the audacity to say he was George Washington, to which I replied: “Aren’t you dead?” I remember that story as a beacon because we were taught to revere our first president not for all his bravery, but for always telling the truth. We were told that he chopped down a cherry tree, as ridiculous as that sounds, and when asked about it he owned up to it, saying: “I cannot tell a lie.” You might say that was the gold standard for behavior. This story was so ingrained in us kids that in art class we all drew hatchets and cherry trees to celebrate him. Well, George Washington really is dead and so are many of the principles he embodied, including the strict adherence to truth. There were no alternative facts. In today’s world, we have allowed the normalization of lies, and it has been to our peril. How we go forward now to restore truth and dignity in our civic dialogue is in question. And, while it is the sworn oath of all of our presidents, it is really up to all of us to elevate truth-telling to it rightful honor. If George could do it, we can too.

About ArtsWestchester
For over 50 years, Janet Langsam of ArtsWestchester has been the community’s connection to the arts. Founded in 1965, it is the largest private not-for-profit arts council in New York State. Its mission is to provide leadership vision and support to ensure the availability accessibility and diversity of the arts. ArtsWestchester provides programs and services that enrich the lives of everyone in Westchester County. ArtsWestchester helps fund concerts exhibitions and plays through grants; brings artists into schools and community centers; advocates for the arts, including public art; and builds audiences through diverse marketing initiatives. In 1998, ArtsWestchester purchased the nine-story neo-classical bank building at 31 Mamaroneck Avenue which has since been transformed into a multi-use resource for artists, cultural organizations and the community. A two-story gallery is located on the first floor of ArtsWestchester’s historic building on Mamaroneck Avenue in White Plains, NY.