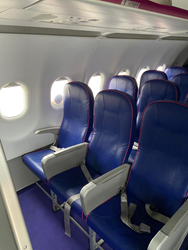 We selected Iridium Next which when combined with our Bluetooth App Network and custom gateways is the perfect formulae for delivering bursty data including, messaging, payment and telemetry.

AS-IP’s President Ron Chapman said, “A key component of the installation is our revolutionary window antenna system. We wanted a certified system that was simple to install with minimal components. The installation was carried out by Storm Aviation Limited in co-operation with Wizz Air UK Technical services.”

The original concept of a Bluetooth passenger network connecting via Iridium utilising a window antenna was tested by AS-IP in 2010. By 2016 we had commercialised the first dual window antenna installation on a private jet. In 2018 we embarked on the airline version conducting further tests with a dual Iridium platform on an Airbus A340.

AS-IP selected Iridium Next which when combined with fflya's Bluetooth App Network and custom gateways is the perfect formulae for delivering bursty data including, messaging, payment and telemetry.

Next step is ground testing to support airline operational approval.

About AS-IP Tech, Inc.
AS-IP Tech, Inc. is leading the world in Bluetooth connectivity solutions for aircraft. The company management has a thirty-year history of flying new communication technologies worldwide.

Over the past decade AS-IP Tech focus has been on creating an alternative method to connect passengers with the aim of reducing the high costs of inflight connectivity. The business jet version of fflya distributed by BizjetMobile LLC, is in operation on multiple fleets, including window equipped aircraft. The latest application launched in November called CrewX, has seen new installs in Asia, USA and Europe. Now more than ever the demand for low cost inflight connectivity is a priority.

Safe Harbor Disclosure:
This press release may include "forward-looking statements" within the meaning of the federal securities laws, commonly identified by such terms as "believes," "looking ahead," "anticipates," "estimates," "may," "will," "should," "could," "expect," "intend," "project," and other terms with similar meaning. Although the company believes that the assumptions upon which its forward-looking statements are based are reasonable, it can give no assurance that these assumptions will prove to be correct. Important factors that could cause actual results to differ materially from the company's projections and expectations are disclosed in the company's filings with the Securities and Exchange Commission. All forward-looking statements in this press release are expressly qualified by such cautionary statements and by reference to the underlying assumptions.

About Storm Aviation Limited:
Storm Aviation Ltd is a UK-registered MRO company operating under UK CAA and EASA issued Part-145 and EASA Part-147 Approvals. It provides an excellent standard of tailored line maintenance services in Europe and around the world. The company provides a tailored range of services including line & base maintenance, training (both mandatory EASA Part-145 and EASA Part-147), AOG support, cabin services, consulting, and Part-M. Its reliable services are currently valued and used by more than 50 airlines.

Storm Aviation is a subsidiary of FL Technics, a global provider of aircraft maintenance, repair, and overhaul (MRO) services, and a family member of the Avia Solutions Group the largest aerospace business group from Central & Eastern Europe with almost 100 offices and production stations providing aviation services and solutions worldwide. For more information, visit: http://www.stormaviation.com and http://www.aviasg.com

About Wizz Air
Wizz Air, the fastest growing and greenest* European low-cost airline, operates a fleet of 136 Airbus A320 and A321 aircraft. A team of dedicated aviation professionals delivers superior service and very low fares, making Wizz Air the preferred choice of 40 million passengers in the financial year F20 ending 31 March 2020. Wizz Air is listed on the London Stock Exchange under the ticker WIZZ.

The company was recently named one of the world’s top ten safest airlines by airlineratings.com, the world’s only safety and product rating agency, and 2020 Airline of the Year by ATW, the most coveted honour an airline or individual can receive, recognising individuals and organisations that have distinguished themselves through outstanding performance, innovation, and superior service.

*Wizz Air’s carbon-dioxide emissions were the lowest among European airlines in FY2019 (57.2 gr/km/passenger)
**One-way price, including administration fee. One carry-on bag (max: 40x30x20cm) is included. Trolley bag and each piece of checked-in baggage is subject to additional fees. The price applies only to bookings made on wizzair.com and the WIZZ mobile app. Number of seats at indicated prices are limited.