As the Election Draws Nearer, It’s Important That Voters Open Their Eyes

Liberty Hill Publishing presents a defense for America as it should be. 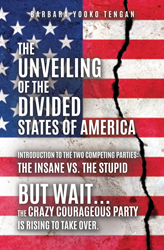 Everyone who loves our nation, which was founded on Judeo-Christian values, must get involved to prevent Socialism from taking over.

As Tengan has watched events unfolding over the past decade or so, she has become more and more convinced that the moral framework of our country is being slowly but surely eaten away by a well-planned Marxist agenda. Abortion laws, rising violence and fake news have driven her to call on other like-minded Americans to take a stand to hold our nation together.

“Everyone who loves our nation, which was founded on Judeo-Christian values, must get involved to prevent Socialism from taking over,” said Tengan.

Barbara Yooko Tengan was born and raised in Maui, Hawaii. She has attended Oral Roberts University and Southwestern Baptist Theological Seminary. Tengan has been involved in missionary work around the Pacific rim nations and served as Senior Pastor of Faith in Jesus Church for almost 40 years. She is President of the Maui Christians Ministers Association and has served on the Hawaii Teen Challenge state board.

Liberty Hill Publishing, a division of Salem Media Group, is a leader in the print-on-demand, self-publishing industry. The Unveiling of the Divided States of America is available online through amazon.com and barnesandnoble.com.