Denver bar, Asbury Provisions, voted Best New Bar in Denver 2015 by the Westword's Reader's Choice Awards, will celebrate its one year anniversary on Thursday, September 17th. Also voted one of the 12 Hottest New Beer Bars in America by Zagat, Asbury Provisions will debut a new collaboration beer and several one-off, rare beers on it's 25 rotating taps. 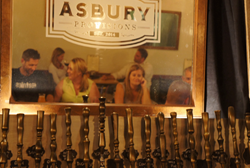 It’s been such an amazing year and we’ve felt so much love and support from the community. We couldn’t be more grateful and appreciative.

Denver bar, Asbury Provisions, will celebrate its one year anniversary with a large celebration on Thursday, September 17th.

The party at the DU area beer bar will showcase the first tasting of a collaboration beer that Asbury Provisions brewed with Renegade Brewing Company. Brian O'Connell, Renegade's founder, will be on hand to help release First Draft Anniversary Porter. There will also be special, rare, one-off beers on the 25 taps, happy hour drink prices all night and guests can expect lots of specials and giveaways.

“Denver is one of the best drinking cities in America,” says Ladd, “but, when we looked at the DU area, we saw a need that hadn’t yet been filled - a place where the local community has access to craft beer and proper cocktails, in and elevated but friendly atmosphere. We’re an owner-operated business, meaning we’re the guys serving your drinks. We know your name, we listen to your feedback. This is a thriving neighborhood and it deserves more than the average college bar. As soon as we opened our doors, we knew we picked the right place.”

“We can’t believe the overwhelming response we received in our first year and are so excited to be celebrating,” says Topham. “It’s been an amazing year and we’ve felt so much love and support from the community. They helped make our dream, of owning a great neighborhood Denver bar, a reality. We couldn’t be more grateful and appreciative.”

The one year anniversary celebration will be open to the public and take place from 6pm until close on Thursday, September 17th.