ASGCT Kicks Off Second Round of Gene Therapy Education Resources 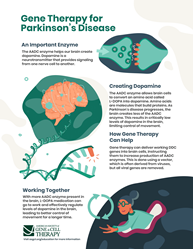 The Patient Education resources on Parkinson’s disease are now available on ASGCT.org. Parkinson’s is a degenerative neurological disease that causes the death of brain cells, called neurons, over time.

The American Society of Gene & Cell Therapy (ASGCT) is proud to announce the launch of a second group of disease-specific resources from its Patient Education program, a new initiative in 2019. The first of the seven new resources focuses on developing gene therapies for Parkinson’s disease.

Beginning today, October 10, ASGCT will release brand new resources weekly through the end of November on the new Patient Education portal. Designed by ASGCT committee volunteers in coordination with patient advocacy groups, the patient-centered portal aims to educate and inform patients, families, and the public on the status and promise of gene and cell therapies.

The Patient Education resources on Parkinson’s disease are now available on ASGCT.org. Parkinson’s is a degenerative neurological disease that causes the death of brain cells, called neurons, over time. Gene therapy for Parkinson’s may offer hope for managing symptoms or improving the effects of existing medications. Learn more about Parkinson’s disease here.

The full schedule for ASGCT’s new Patient Education resources to be released during the remainder of 2019, excepting a one-week break for the ASGCT Policy Summit is as follows:

About ASGCT
The American Society of Gene & Cell Therapy is the primary professional membership organization for scientists, physicians, patient advocates, and other professionals with interest in gene and cell therapy. Our members work in a wide range of settings including universities, hospitals, government agencies, foundations, biotechnology and pharmaceutical companies. ASGCT advances knowledge, awareness, and education leading to the discovery and clinical application of gene and cell therapies to alleviate human disease to benefit patients and society.