ASI Mining has started work on a project in Ukraine to retrofit and automate a fleet of 15 haul trucks at the Ferrexpo Yeristovo Mine (FYM). 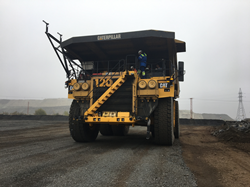 We selected ASI Mining because it is one of the world’s leading providers of robotics and automation and has already completed a significant number of successful deployments with major corporations in the mining and automotive industries.

ASI Mining, a subsidiary of Autonomous Solutions, Inc. (ASI), has started work on a project in Ukraine to retrofit and automate a fleet of 15 haul trucks at the Ferrexpo Yeristovo Mine (FYM).

“This project is one of the first major autonomous haulage deployments in Eastern Europe. It represents a major milestone for the accessibility of automation at sites across the world,” said Patrick Hald, General Manager, ASI Mining. “Autonomous mining is no longer a luxury available only to the largest mines.”

FYM and ASI Mining successfully completed an initial test on October 21, 2019 by converting, and autonomously operating, a 793D haul truck. Ferrexpo plans to expand automation to a total of 15 trucks within the next two project phases, subject to market conditions and cash flows.

Alexander Tubaltsev, Chief Miner at Ferrexpo Yeristovo Mining, said, “We selected ASI Mining because it is one of the world’s leading providers of robotics and automation and has already completed a significant number of successful deployments with major corporations in the mining and automotive industries. Ferrexpo is very proud to be the first to lead this initiative, not only in Ukraine, but also as the first open pit mine in Europe to do so.”

FYM anticipates the autonomous mining fleet will deliver significant safety benefits to employees, particularly by eliminating fatigue-induced accidents. The improved safety benefits will also be complemented by expected improvements in productivity and better control over the quality of the company’s ore mix.

ASI’s Mobius® Haulage A.I. will be a key component in the implementation and operation of the project. Mobius leverages advanced multi-vehicle command and control software to set up and manage a coordinated system of haul trucks. The Mobius Haulage Platform manages autonomous traffic, coordinates manned or unmanned vehicles and regulates the haul cycle in the most efficient way possible.

By employing Mobius software at the Yeristovo mine, Ferrexpo anticipates improvements in utilization, along with increased safety and productivity gains.

About ASI Mining
ASI Mining is partially owned by Epiroc, which acquired 34% of the company in 2018. ASI Mining is recognized for its products and solutions in robotics and autonomous vehicle technology including autonomous haulage, semi-autonomous blasting, drilling, dozing, loading and other applications. In addition to providing solutions for some of the world’s largest mining corporations, ASI Mining is also an automation partner for several global mining vehicle manufacturers. Learn more at http://www.asirobots.com/mining.

About Ferrexpo
Ferrexpo is a Swiss headquartered iron ore company with assets in Ukraine. It has been mining, processing and selling high quality iron ore pellets to the global steel industry for 40 years. Ferrexpo’s resource base is one of the largest iron ore deposits in the world. In 2018, the Group produced 10.6 million tonnes of pellets, a 2% increase compared to 2017, ranking it as the 3rd largest exporter of pellets to the global steel industry with a market share of approximately 8.5%. Ferrexpo has a diversified customer base supplying steel mills in Austria, Germany, Japan, South Korea, Taiwan, China, Slovakia, the Czech Republic, Turkey and Vietnam. Ferrexpo has a premium listing on the main market of the London Stock Exchange under the ticker FXPO. For further information, please visit http://www.ferrexpo.com.