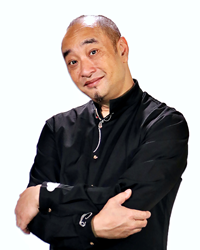 Alain Nu, The Man Who Knows

Harnessing the dynamics of Yin and Yang, I restructured my show and have received great reviews and accolades, and I also realized my dream of headlining in Las Vegas.

Asian American entertainers have always been a rarity in Las Vegas. For the past six months, Alain Nu, who is billed as “The Man Who Knows,” has been the only Asian American headliner performing in The City of Entertainment.

Entertaining audiences with seemingly paranormal feats and uncanny mentalism demonstrations, Nu will celebrate his 100th COVID-era Vegas performance on Friday, June 11, at 4:30 p.m. in the Pegasus Showroom at Alexis Park Resort. He first gained popularity as the star of the TLC Network television specials, “The Mysterious World of Alain Nu.”

“When I started my Vegas residency last November, I faced an unusual challenge for someone used to bringing people up on stage to participate up close with me. There was 25 feet of social distancing between me on the stage and the audience, spectators were masked and on-stage audience participation was prohibited under state-mandated protocols,” said Nu. “As a result, I had to totally rethink and redesign my previous stage show.”

According to Nu, he turned to the ancient Chinese philosophy of Yin and Yang, the concept that seemingly contrary forces may actually be interdependent.

“In my youth, I dealt with anti-Asian racism, in many ways, by embracing Yin and Yang. I was taught that when situations go beyond their extremes, they alternate to their opposite, and in many cases I found this to be true. This was a concept that I learned to apply to my life during my upbringing,” Nu continued.

“As much as the pandemic protocols were a disadvantage for stage performers, I tried to reframe and perceive them as an advantage. Harnessing the dynamics of Yin and Yang, I restructured my show and have received great reviews and accolades, and I also realized my dream of headlining in Las Vegas. It didn’t occur to me that I would also be the only Asian-American headlining in Vegas,” said Nu.

“I would be remiss during AAPI Heritage Month if I didn’t acknowledge earlier Vegas performers, such as Don Ho in the 1960s to more recently singer Bruno Mars, comedian Margaret Cho and magician Shin Lim, all of whom helped pave the way to my residency,” added Nu.

“Although I experienced anti-Asian racism from my first day in kindergarten and throughout my life, I can’t say that about Las Vegas where I not only perform, but also now live,” said Nu, whose heritage is half-Chinese and half-Vietnamese. “Whether it’s tourists or locals, I’ve been fortunate to have not experienced any anti-Asian sentiment personally. I think right now we’re seeing that people are just excited to be vaccinated and out in the world. And I can’t believe that my 100th Vegas performance is fast approaching.”

Alain Nu, The Man Who Knows, performs Friday, Saturday and Sunday at 4 p.m. in the Pegasus Showroom at Alexis Park Resort, 375 E. Harmon Ave. Tickets are available at http://www.Ticketkite.com.

Nu is the author of “State of Mind: The Man Who Knows Reveals The Secrets of Mind Over Matter” (ISBN 0984208569) and “Picture Your ESP!: Reveal Your Hidden Powers With The Nu ESP Test” (ISBN 0984208526). Fans can connect with Alain Nu on Facebook and Instagram, plus at his official website http://www.TheManWhoKnows.TV.