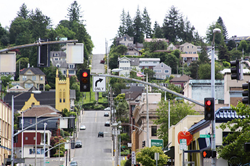 Given the positive outcomes from transactions such as these, we may see other cities decide to follow Astoria’s lead.

With a transfer of funds and a handshake, The Climate Trust today fulfilled their contract with the City of Astoria for the purchase of their verified carbon emission credits.

Through this innovative agreement, Astoria will reduce the volume of timber harvested in the city-owned Bear Creek Watershed in return for carbon credits; effectively, storing carbon and preventing the release of carbon dioxide that results from harvesting trees. The City plans to harvest about one third of the amount of annual growth in the coming decades, significantly less that what is allowed under the Oregon Forest Practices law.

This new carbon revenue stream will replace foregone harvest revenue and provide critical support to Astoria’s capital improvement fund. Revenue from the carbon credit transaction will be applied directly to the construction of a new water line in the City’s watershed, and to other capital improvement needs.

“This project encourages natural forest growth in Astoria’s 3,700-acre Bear Creek Watershed by limiting timber harvest; an activity that couldn’t be sustained in the absence of carbon revenue,” said Ken Cook, City of Astoria’s Public Works Director. “In addition to being a valuable natural resource, the watershed now generates long-term sustainable revenue for the benefit of Astoria’s citizens.”

All of the 245,000 carbon credits purchased by The Trust will be directed to offset the carbon dioxide emissions from Portland General Electric’s Carty facility, helping to mitigate industrial pollution that contributes to climate change. The Astoria offset purchase is equivalent to the annual greenhouse gas emissions from over 51,000 passenger vehicles driven for one year.

“The City of Astoria is taking a climate leadership role with the adoption of this innovative model that marries conservation with finance,” said Sean Penrith, Executive Director for The Climate Trust. “Because of the financial incentive provided by this agreement, the City will be able to prioritize conservation, clean drinking water, and forest health; benefits that translate directly to the citizens of Astoria. Given the positive outcomes from transactions such as these, we may see other cities decide to follow Astoria’s lead,” continued Penrith.

The Climate Trust was founded to administer the first legislation in the nation to curb carbon emissions—the Oregon Carbon Dioxide Standard. The Oregon Standard requires fossil fuel-fired power plants to reduce or offset their emissions; providing funding for high-quality projects that reduce pollution.

Overall, 56% of the money invested by The Trust on behalf of utilities stays in Oregon. That’s over $8.5M spent on 17 projects throughout the state—projects that create jobs for Oregonians. Projects are from diverse sectors, including transportation, renewable energy, forestry, biogas, energy efficiency, and landfill and waste. To date, over 920,000 tonnes have been retired from Oregon projects that are expected to reduce almost 2M tonnes of emissions over their lifetime.

Astoria’s carbon offsets have been verified under the American Carbon Registry’s (ACR) Improved Forest Management for Non-Federal U.S. Forestlands Methodology; quantifying greenhouse gas removals and emission reductions through increased forest carbon sequestration. The City of Astoria is committed to continuing monitoring and verification of the project to ensure that its climate benefits persist for a period of 40 years, as required by the ACR standard.

Building upon a legacy of innovation and leadership in the carbon market, The Climate Trust mobilizes conservation finance to maximize environmental returns. We value air, water and soil through the development, purchase and sale of qualiﬁed oﬀsets and a relentless investment in people and projects with environmental purpose | http://www.climatetrust.org | @climatetrust | facebook.com/TheClimateTrust