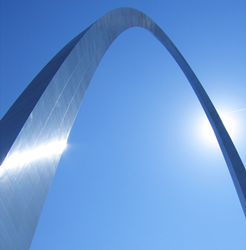 The Astro Pak chemical cleaning was found to be successful in removing surface corrosion and embedded metal oxides within the graffiti. The chemical techniques that they utilized produced the appearance of the test panels closest to the control panel.

Since its completion in 1965, St. Louis’ Gateway Arch has been a shining icon of the Midwest, commemorating the United States’ westward expansion and the area’s role as a center of commerce to points west, as well as southward down the Mississippi River. However, its sheen has been somewhat diminished over the last half century due to atmospheric pollution, the attentions of millions of tourists and, even from the methods used in its construction. At the upper levels of the monument, the stainless steel cladding shows signs of weathering and discoloration, including marks left on the surface by the machinery and crews who built it. Down at the base, deicing salt, visitors’ hands and even graffiti have likewise left their marks.

Since 2005 a series of investigations have been looked into how to remove the worst effects of the passage of time and ensure that the Arch will continue to shine for many decades to come. In 2018, the Association for Preservation Technology (APT), an interdisciplinary organization committed to promoting the best practices and technologies for conserving and preserving historic structures hosted an expert workshop at the monument. Three techniques, using vastly different technology, were tested upon sample stainless steel panels identical to those used on the Arch’s surface. All three teams were challenged with the same requirements where their proposed methods must:

The pressurized water, steam and dry ice process was determined to be a possible solution to remove surface deposits on the upper surface, but it failed to remove discoloration and surface corrosion. Additionally, it did not remove the embedded iron caused by graffiti nor its resulting corrosion.

The laser cleaning process was found to be better at removing surface deposits and succeeded at removing some of the surface corrosion, but it was unable to remove embedded metal oxides. However, the laser left visible banding marks on the surface. Overall, the conclusion was that the technology could be more viable in the future with further advancements.

Astro Pak’s method was deemed to be the most successful, achieving the stated goals, including removing the stains from the deicing salt and returning the panels surface to nearly the same as the original panel. In the official Conservation Management Plan posted by the study committee at it was cited, “the Astro Pak chemical cleaning was found to be successful in removing surface corrosion and embedded metal oxides within the graffiti. The chemical techniques that they utilized produced the appearance of the test panels closest to the control panel.” The study also looked at the specular gloss aspect of the processed panels, identifying that parameter as “the most often used when the surface optical quality of a product needs to be evaluated.” The study noted that the panel which Astro Pak treated with NeutraRouge, AP410 and a hand buffing was the closest to the control with ‘substantially smaller standard deviation.’”

Astro Pak’s solution scored highest in effectiveness, gentleness and economic feasibility. The Association is continuing its studies with an eye to respecting the natural aging process as the best practice for preserving not only the monument itself, but the integrity of the symbolism as well. The lessons learned will likely be applicable to not only the Gateway Arch, but to other historic buildings and landmarks with stainless steel exteriors as part of their preservation process.