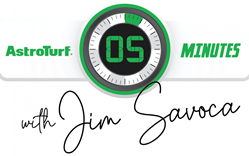 Jim, tell us about your current position with AstroTurf.
Hello, I’m Jim Savoca. I am the national sales manager for AstroTurf. I’ve been in the business for 41 years, and with AstroTurf for probably north of 30 of those.

That’s awesome. Tell us about what the turf industry was like when you first started.
When I first started in the industry, the market was probably 30 fields for all of North America. They were the old school AstroTurf. They would cost literally a million dollars, a million and a half dollars, because you had to put down an asphalt subbase. Then you had to put down the pad, then put down the turf with glue layers in between them. It was a very difficult sell that would be take three years or more to get it done because you had to overcome all the early issues, and they weren’t really your friendly kind of surfaces. But it was our technology at the time.

When did the turf industry really start to change?
That early period led us through about the first 15 years of my career. Then came the advent of the infilled fields, where the fibers were longer, and they were filled up with material. Rubber and sand typically. Now much more player friendly, much more cost effective, the entire project went from a million and a half down to less than a million dollars typically. Sometimes as little as $750,000. They no longer used the asphalt base, but instead a stone base that drained vertically. So, a total flip on technology. They were cheaper, they were better – they looked more like grass, and they were much more friendly to the athlete.

Tell us about that legendary coach that you played football for in college.
I played football at Ohio State and played for Woody Hayes there. The story that I have brought along with me in this industry is that Woody Hayes and I both played our last game together. The game against Clemson in the Gator Bowl, when he punched that fellow, well I was the messenger guard standing next to him. That was his last game, and it was my last game because I was a senior.

After Ohio State, what came next?
I graduated from college and it was a very difficult time. It was the late 1970s. There was high inflation, high unemployment, all sorts of stuff going on. I just sent out resumes to every company I knew. One of those companies was Monsanto, who is the inventor of AstroTurf. They were taking their salesforce from five nationwide to 10. So, I was part of that class. Monsanto was probably the 40th biggest company in the world at the time. Working for a chemical company, with thorough and in-depth training -It was one of the greatest platforms from which to launch a career.

What stands out now to you, all these years later?
I always say when I talk to my bosses, the only way out of here is feet first. I enjoy it, I love every day of this job. I enjoy the competitiveness and I love the people. The legacy, when you come down to it, when you get through all this turf stuff, the great stadiums, and facilities, it’s a place for kids to play. Whether it’s the big kids in the NFL, or kids that come to this kind of facility (Melissa Intermediate School District) where everybody in the community uses it, it’s a place to play, and we want to make it as uniform, predictable, safe, durable, and make it as good of an investment as possible. My legacy is that, and the guys I have worked with and trained. Hopefully they think that I was a good guy, both on and off the field.

Give us your AstroTurf pitch.
The big thing is with AstroTurf, we are unique, not in that we are the only guys that make the products, but our products are a cut above. And a lot of it has to do with a component called the RootZone, which we invented, and we have stuck with. This is the portion of our product that gives all the ability for the infill to stay where it is supposed to be.

RootZone gives it the long-term consistency, and durability that we want. Which, again, if you don’t get the good investment part of this program, then it doesn’t matter. Because no matter what you buy for the first two or three years it’s great. Everybody’s happy, ribbon cutting, everything you do, it’s all great.

The thing we always preach is that the kids that are in kindergarten now will be playing on that same high school field eight to ten years from now. They will be ninth or tenth graders and there will be the same field. Outside, under all of the elements, rain, snow, sleet, heat, unlimited use, unprotected. It is a hard design criterion, so that is why I take a lot of pride in our ability to provide great products that can stand up to that.