AstroTurf®, The Story Behind the Product That Revolutionized Sports Surfaces

Many people know the origin story of AstroTurf®, or at least they think that they do. The popular story is that it was developed specifically for the Houston Astrodome, but its roots go back just a little farther than that. 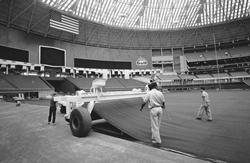 Many people know the origin story of AstroTurf®, or at least they think that they do. The popular story is that it was developed specifically for the Houston Astrodome, but its roots go back just a little farther than that.

The synthetic grass product that eventually became known as AstroTurf® was originally designed as an urban playing surface meant to replace the concrete and brick that covered the recreation areas in city schoolyards. During the Korean War, the U.S. Army had found urban recruits to be less physically fit than rural recruits. Attributing this to lack of green space in cities, the Ford Foundation funded research for Monsanto to create a synthetic grass replica in 1962. It had to be wear-resistant, cost efficient, comfortably cushioned, and traction tested. Two years later employees of the Chemstrand Company, a subsidiary of Monsanto Industries, developed a synthetic surface called ChemGrass and installed it at the Moses Brown School, a private educational facility in Providence, Rhode Island.

The new product met each of the Ford Foundation’s original criteria except one: It was expensive to produce making it an unviable option for inner-city playgrounds. However, it soon found a new home and a new name.

In 1965, the Astrodome, the world’s first domed stadium opened in Houston, Texas, featuring a glass-covered roof that allowed real grass to grow inside the dome. However, the athletes that used the facility complained they couldn’t follow the path of the ball because of the glare caused by the glass. Painting the glass killed both the glare and the grass, so the lifeless lawn was replaced in 1966 with the revolutionary ChemGrass, which was quickly dubbed AstroTurf®. The new turf was a resounding success, and it soon became a desired surface for both indoor and outdoor stadiums. Dubbed the “Eighth Wonder of the World”, the Houston Astrodome was renowned not only for its innovative design and remarkable roof but also for the artificial grass that covered its playing surface and forever changed the face of sports.

AstroTurf® has been the stage for some incredible moments in sports history as it has been the surface for 12 World Series, 11 Super Bowls, 10 Olympics, 8 Major League All Star Games, and 32 NFL Pro Bowls, as well as other great games at every level.

It has been over a half century since AstroTurf® was first installed at the Astrodome and technology has rapidly improved. Current AstroTurf® products come ever closer to replicating, the feel, performance, and safety of the gold standard – natural grass. AstroTurf Corporation harnesses its history of forward-thinking and disciplined R&D to continuously improve its systems and to deliver playing surfaces with the best sport-specific performance, durability, and player protection.

Today, AstroTurf® is owned by Sport Group. Sport Group is a true global sports surfacing giant, with manufacturing facilities around the world. Active in over 70 countries, Sport Group has installed over 30,000 synthetic turf fields and running tracks. Sport Group was created by selective acquisitions of the leading turf, track, indoor and outdoor sports surface manufacturers. AstroTurf is now in the enviable position of enjoying a completely vertical and fully integrated environment, where all of its ideas can be brought to life in a market hungry for innovation.