Prime Communications and over 111,000 customers raise $1,000,000 to bring brighter days and better treatments to children with cancer. 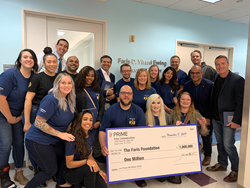 Prime Communications – AT&T’s largest authorized retailer – raised a record $1,000,000 for The Faris Foundation’s “Let There Be GOLD” campaign during September in recognition of National Childhood Cancer Awareness Month. This nationwide effort in 2,000 stores across 46 states galvanized the support of over 111,000 customers, raising $720,000 in stores and through community partnerships. More importantly, the month-long campaign brought much-needed awareness to childhood cancer and the lack of federal funding for childhood cancer research and other deep inequities affecting children with cancer. Prime leadership pledged an additional $280,000 to the Foundation in support of its transformative work in this area.

Childhood cancer is the number one cause of death of children in the U.S., and yet only 4% of the federal cancer budget research goes towards childhood cancer research. This cause is deeply personal for Prime CEO Farid Virani, whose own son, Faris D., was diagnosed with a rare cancer (Ewing sarcoma) at age six. During his three-year journey with Ewing sarcoma, Faris was always bewildered why the public did not rally around the gold ribbon and childhood cancer, as they did for other causes. “Don’t we matter,” he asked. “Aren’t children important? When I grow up, I will Let There Be GOLD.” Faris didn’t have the chance to grow up and be a champion for the cause. It is in his honor, and in honor of every child affected by cancer, that Prime, for the third consecutive year, deepens its commitment to bring brighter days and better treatments to children with cancer.

“I saw our team demonstrate incredible leadership and compassion, taking on this initiative with their whole hearts,” shared Farid. “I’m so proud of their efforts to ‘Let There Be GOLD’ for children across the country, and it is an honor for the company to make an additional contribution to reach our $1 million goal.”

Throughout September, Prime also sponsored a series of “Golden Moments,” where employees could honor a child or family affected by cancer in their own community. Each Golden Moment was unique to the wishes of the child. For example, a young LSU fan got to go cheer on her favorite Tigers football team, and enjoy a normal teenage day away from her treatment at the hospital.

“The Faris Foundation is so grateful to all who participated. Every dollar contributed will go directly to funding the most innovative research in rare childhood cancers and hospital programs that bring delight to the lives of children with cancer,” said Asha Virani, Executive Director of The Faris Foundation. “September is dedicated to childhood cancer awareness, but for the Foundation every day is dedicated to the cause, as we strive to improve the quality of life for children with cancer.”

The company, represented by top-performing sales team members from across the country, presented the total donation to The Faris Foundation on November 8, 2019. The ceremony was held at Texas Children’s Cancer Center, the largest pediatric cancer center in the country.

About Prime
Established in 1999, Prime is the largest AT&T Authorized Retailer in the United States, with nearly 2,000 stores from coast to coast. A rich entrepreneurial spirit permeates everything we do, creating an environment where creativity, leadership and teamwork are rewarded, and where individuals and stores can see and feel the fruits of their success. Learn more at http://www.primecomms.com.