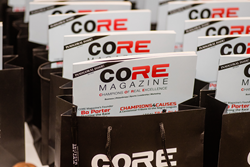 Unlike any other magazine, CORE is blazing a new trail with uplifting articles about champions in sports, business, leadership, philanthropy and marketing who’ve encouraged and advanced others in their spheres of influence...

Bo Porter Enterprise celebrated the October launch of CORE Magazine, its most recent business venture, on Wednesday, September 30 at the Junior League of Houston. Athletes, business associates, friends and family joined Marquis “Bo” Porter, founding president and chief executive officer, to celebrate and toast the premier issue of his first-of-its-kind magazine for champions, an extension of Porter’s widely respected brand.

Mistress of ceremonies Debbi Taylor, who also is a senior reporter for CORE Magazine, kicked off the evening’s festivities by pointing to Porter’s extensive accomplishments that have covered all the bases, from college athletics to the MLB as a former player, coach, Houston Astros manager and Atlanta Braves assistant general manager, and current Mid-Atlantic Sports Network broadcaster for the 2019 World Series Champion Washington Nationals.

Reverend Irving Johnson, Porter’s father, delivered a heartfelt prayer and blessing for the magazine. Mayor Turner, who has championed Houston through many triumphs and challenges since taking office in 2016, provided opening remarks and inspirational well-wishes for the magazine’s success.

Following an elegant seated dinner, lifelong friend John McIver delivered an insightful introduction, reflecting on childhood memories when the two friends would look at baseball pictures on magazine covers, and Porter would predict his future professional baseball career as a player and manager, as well as his future business venture as a magazine owner.

“Bo does not set goals; Bo sets expectations,” said McIver. “He didn’t live down to his obstacles. He lived up to his own expectations.”

Porter took the stage to expand on the roots of the publication and his mission and long-term vision for CORE magazine, which is premiering as a quarterly digital publication with print-on-demand capabilities. He spoke of passion for hope – Helping Other People Excel – as his underlying motivation for publishing a first-of-its-kind publication that intersects business, sports, leadership, marketing and philanthropy.

Each issue will showcase distinct recurring features: Ball2Business – former athletes who have championed their careers and transitioned to success in the business sector; ME2me – former athletes and business professionals providing inspiration by writing in upper-case ME to their younger lower-case me; Champions4Causes – champions in career and philanthropy; and A.P.E.X. At the Pinnacle of EXcellence Award feature stories of champions in sports, business and leadership who exemplify the highest quality in their respective fields.

Porter shared highlights from CORE Magazine’s inaugural issue, which features interviews with Mike Rizzo, president and general manager of baseball operations with the Washington Nationals of Major League Baseball; Bill Parcells, the only coach in NFL history to lead four teams to the playoffs and three teams to a conference championship game, and head coach of the New York Giants Super Bowl XXI and XXV championship teams; B.J. Armstrong, winner of three NBA championships during his career as a point guard with the Chicago Bulls; Bob Kendrick, president of Negro Leagues Baseball Museum and creator of the museum’s recent Tipping Your Cap campaign associated with the 100th anniversary of the Negro League’s founding; Carlos Peña, former MLB first baseman, studio analyst with the Major League Baseball Network (MLB Network) and New England Sports Network, and spokesman for Big Brothers Big Sisters of America; James Rodney “J.R.” Richard, a former MLB starting pitcher, inductee in the inaugural class of the Houston Astros Hall of Fame and a dynamic force in helping establish baseball programs for children; and Jennifer Altman, office managing partner dedicated to sophisticated healthcare-related litigation at the Miami office of the law firm Pillsbury Winthrop Shaw Pittman LLP and named “2020 Attorney of the Year” by the Top 100 Registry. The launch issue of CORE Magazine also features an article by Porter himself, titled “Starting the Race and Leveling the Playing Field,” a personal perspective about racism and inequality. Rounding out the premier issue are two COVID-19 impact reports, including the pandemic’s impact on education and the future of America’s youth, and a financial impact report.

“The launch of CORE Magazine represents a milestone in the publishing industry,” said Porter. “Unlike any other magazine, CORE is blazing a new trail with uplifting articles about champions in sports, business, leadership, philanthropy and marketing who’ve encouraged and advanced others in their spheres of influence, and CORE Magazine’s authentic stories are laser focused on inspiring a diverse national audience.”

Porter’s mother, Beverly Porter, led the crowd in a festive champagne toast to CORE Magazine’s launch. Dr. Heather Brown, an elite Top 1% Preferred Provider of Invisalign through her Dr. Heather Brown Orthodontics in Houston, assisted Porter with the unveiling of the cover of the magazine’s premier issue, which is expected to reach millions of growth-mindset readers. The reporters and contributing writers then signed a life-size magazine cover while goodie bags containing hot-off-the-press CORE Magazines were distributed to attendees.

Digital subscriptions are available at core-mag.com/product/magazine-subscription/, which also provide access to newsletters, special report articles, subscriber-only cost-saving offers and rebates, an online business directory and an events calendar. Unique sponsorships are available to businesses looking to unlock unprecedented engagement opportunities with the champions showcased in each issue.

Porter is founder and chairman of the board of Bo Porter Charities, through which he is a strong advocate of philanthropy and community engagement to improve and impact the lives of others through sports, education, life skills and faith. Building on his unwavering commitment to inspire and engage, 10 percent of CORE Magazine’s annual income is being donated to non-profit organizations.