Tradition of sharing brings joy to both singers and audiences. 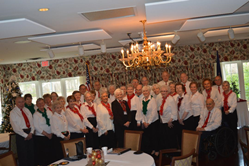 We’re thrilled to bring music that brightens their souls.

Their talents light up a room, but it’s not just audiences that are inspired as they experience a performance by vocal groups from Atlantic Shores Retirement Community in Virginia Beach, Virginia, it’s the chorus members themselves. The only retirement community in the region with both a four-part chorus and special ensemble group, Atlantic Shores proactively supports music education and performance for the personal expression of their musically talented residents, to enrich the lives of its independent living, assisted living and memory care residents, to give back to the greater community, and to span the generations.

The long tradition of resident musical groups began almost 23 years ago when Atlantic Shores first opened. Resident Dean Hatheway, who loved to sing in his Barber Shop Quartet, started the first group, Community Singing. They performed with no accompaniment, but with Dean leading songs with his harmonica. This group evolved into the Forget-Me-Notes, an a cappella group started in 2009 by resident Mike Ferguson, who led with skills learned in his church choir. When the choir was in need of a new director, resident Don Beamon reached out to former resident Beth Smallwood with a request for her to teach them a song in three-part harmony, after which she was asked to remain as their leader.

A trained vocalist, band member and professional piano teacher, her first act as director was to change the name of the group to the Atlantic Shores Chorus. She put out a call for singers, and discovered many who had never participated before. The group’s 40 members range from those who sang in college and community choruses, to an 89 year-old Methodist minister who had never learned to read music.

Members also expressed interest in creating a smaller group to do special performances inside and outside the community as a show choir. Tryouts were held, and 12 members selected to create the Atlantic Shores Coastal Singers.

Both groups perform a wide variety of styles, with almost half the music arranged by Beth, and rehearsals held once a week.

The groups delight fellow residents throughout the year, with a season running from September through May, always ending with a popular Memorial Day concert. Performances for 250 guests are held in the community’s beautiful Chesapeake Room. Special sing-along shows are created for Valentine’s Day and St. Patrick’s Day. Patriotic songs are featured in a special Veteran’s Day celebration. In the off-season, July and August, the chorus performs sing-along’s for the community, including a special preview of songs they will be performing in the fall.

Throughout the year, several themed shows add to the fun, including the upcoming “Cruise Around The Word,” performance, and “The Weather Channel” performance, starring resident Bob Burchett as a weatherman announcing weather-themed songs like “Raindrops Keep Falling on my Head.” A special multigenerational Christmas concert is being planned for this year, with Virginia Beach’s Ocean Lakes High School students joining the chorus for a special holiday event at Atlantic Shores.

Throughout the years, many memorable performances have especially touched the group’s director. According to Beth, “My favorite one has to be our Broadway Musicals performance featuring Rogers & Hammerstein, and Gershwin. It was challenging because there were so many songs, but also so beautiful, especially when our resident couple, the Beamons, danced to the Tennessee Waltz.”

The Coastal Singers provide a very special welcome to new Atlantic Shores residents by performing at New Member’s Tea events, and also entertain local church and civic groups at luncheons and meetings held at Atlantic Shores. The group also donates their time to perform for organizations in the area, like the Thoroughgood Ladies Music Club.

One of the most popular and rewarding ways this group uses its musical talents is by performing each month for residents at Harbourway, Atlantic Shores’ assisted living facility. The interactive sing-along concerts are one of the most eagerly anticipated social events, and also serve as informal music therapy for the residents.

According to Beth, “I’m a psychiatric nurse, so I know the value of music therapy. Many of these residents have physical disabilities or cognitive challenges. We’re thrilled to bring music that brightens their souls. They even come early to listen to our rehearsals.” Atlantic Shores Chorus and Coastal Singers member Shirley Barcus adds, “It’s so obvious that these wonderful residents really enjoy the music, they always smile and sing along. Their joy brings me joy.”

Musical talents at Atlantic Shores extend beyond singing, to a pool of talented musicians who use instruments to perform, including a couple that plays duets on the piano, residents and staff who play the guitar, and even a gentleman who plays the harmonica.

In turn, Atlantic Shores residents frequently attend a wide range of area performances including, Tidewater Winds, Symphonicity, Symphony by the Sea, and Big Bands on the Bay. And Atlantic Shores has a tradition of supporting the performing arts by partnering with the Virginia Opera, and the Sandler Center.

As the musical “face” of the retirement community, Atlantic Shores’ vocal performance groups continue a tradition that is driven by its member’s love of performance. Beth agrees, “Their enthusiasm is amazing. They’re always prepared, eager, gracious, and ready to go above and beyond. Whether performing or just rehearsing, they say the experience fills them with happiness. For that we are all grateful.”