Attackers expected to target Large Companies regardless of industry in 2023, Titaniam Study Finds 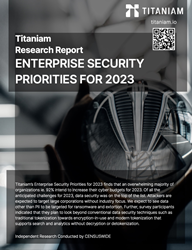 Titaniam’s Enterprise Security Priorities for 2023 finds that an overwhelming majority of organizations ie. 92% intend to increase their cyber budgets for 2023.

Attackers are expected to broaden their targeting strategy beyond regulated verticals such as financial services and healthcare. Experts predict that large corporations (41%) will be the top targeted sector for cyberattacks in 2023, favored over financial institutions (36%), government (14%), healthcare (9%), and education (8%).

The fast pace of change has introduced new vulnerabilities into corporate networks, making them an increasingly attractive target for cyberattackers. To compete in the digital marketplace, large companies are adopting more cloud services, aggregating data, pushing code into production faster, and connecting applications and systems via APIs. As a result, misconfigured services, unprotected databases, little-tested applications, and unknown and unsecured APIs abound, all of which can be exploited by attackers.

The top four threats in 2022 were malware (30%), ransomware and extortion (27%), insider threats (26%), and phishing (17%). (In contrast, the Verizon Data Breach Investigations Report revealed that phishing was the #2 threat in 2022, right behind credentials theft). The study found that enterprises expected malware (40%) to be their biggest challenge in 2023, followed by insider threats (26%), ransomware and related extortion (21%), and phishing (16%). Malware, however, has more enterprises worried for 2023 than it did for 2022. It is important to note that these threats can be overlapping, where insiders can have a hand in ransomware attacks, phishing can be a source of malware, etc.

Attackers are evolving their strategies in an attempt to surprise and outmaneuver security teams, which have hardened ransomware defenses and improved phishing detection. They’re using new malware, such as loaders, infostealers, and wipers to accelerate attacks, steal sensitive data and create mayhem. They’re also buying and stealing employee credentials to walk in through the front door of corporate networks.

Nearly two-thirds (65%) of companies were breached in 2022 as attackers exploited process gaps and security vulnerabilities to access networks. While no corporate security team wants to detect a breach, they’re doing it faster, thanks to security platforms that use automation and artificial intelligence to detect anomalies amidst noise and speed up security operations processes. Among those breached, 91% of security operations teams detected the incident within a week, while 100% identified it within a month. Less hacker dwell time in networks means less damage for these companies.

However, attackers are also getting smarter. Once inside corporate networks, they move swiftly to target and exfiltrate high-value data, including data crucial to the organization (57%), intellectual property (57%), and personal identifiable information (PII) or sensitive PII (38%). (Some data represents more than one type of information.)

Moving into 2023, attackers will target structured data used for analytics (68%) over that used in databases (62%). They’ll also target unstructured data created by users (58%) over that created by applications (54%) or other sources (16%). Analytics and user data reveal corporate intent, providing a lens into strategies, plans, product launches, partnerships, and other information of interest to attackers, such as nation-states, cybercriminals and more.

Protecting data enables large companies to safeguard their plans and intellectual property. Thus, it’s not surprising that protecting data (31%) has emerged as the #1 security priority for 2023, ahead of preventing ransomware, data exfiltration, and extortion (27%), staying ahead of malicious attacks (23%) and other objectives. To realize this goal, 92% of teams plan to increase their security measures in 2023, while 97% will explore new solutions.

Data Security rose to the top of the priority list for 2023 with over 30% of participants checking that as their most important upcoming project. This was followed closely by ransomware and extortion defense at over 25%. Security teams should look for a data protection platform that uses encryption-in-use, next-generation tokenization, and other techniques that safeguard data throughout its lifecycle while still retaining rich data usability such as search and analytics. By doing so, organizations can protect themselves against data exfiltration and ransomware demands.

ABOUT TITANIAM
Titaniam is the industry’s most advanced data security and ransomware defense platform that utilizes high-performance encryption-in-use to keep valuable data secure even if the enterprise is breached and its data stolen. With the ability to process data without decryption and support nine different privacy-preserving data formats, Titaniam is the market's answer to address ransomware and extortion, insider threats, and data privacy enforcement. In addition to cutting-edge encryption-in-use, a single deployment of Titaniam provides the equivalent of three other categories of data security solutions including tokenization. In the event of an attack, Titaniam offers auditable evidence that valuable data retained encryption throughout the attack, thus minimizing compliance as well as notification obligations. Titaniam is a Gartner Cool Vendor in Data Security, named vendor in Gartner Hype Cycle for Data Security, named Vendor in Gartner Hype Cycle for Data Privacy, Winner of the coveted SINET16 Security Innovator Award, four Global Infosec Awards at RSAC2022, TAG Cyber Distinguished Vendor, and Intellyx Digital Innovator for 2022. To learn more, visit https://titaniam.io/.