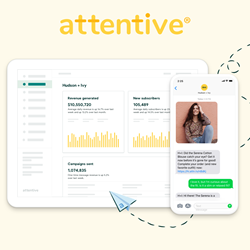 Attentive now works with over 1,000 leading businesses such as Coach, Urban Outfitters, CB2, PacSun, Lulus, and Jack in the Box—driving billions of dollars in transactions.

“Messaging is a critical communications channel growing at an incredible rate. In late Q1 and early Q2—we saw a 50% increase in daily average new subscribers, as well as strong growth of total text messaging volume,” said Brian Long, Co-Founder and CEO of Attentive.

Attentive®, the personalized mobile messaging SaaS platform for brands and organizations, announced today that it has extended its Series C investment round to $110 million. Sequoia Capital Global Equities, Sequoia’s hybrid crossover fund, and Coatue are joining as new investors.

The Series C round was originally announced in late January 2020, led by Sequoia and IVP. This investment came just six months following the announcement of its Series B round in August 2019, also led by Sequoia with participation from Bain Capital Ventures, NextView Ventures, Eniac Ventures, and High Alpha.

Today’s announcement brings the total capital raised by Attentive to $164 million—$150 million within the past eight months.

Attentive now works with over 1,000 leading businesses such as Coach, Urban Outfitters, CB2, PacSun, Lulus, and Jack in the Box—driving billions of dollars in transactions.

“Messaging is a critical communications channel growing at an incredible rate. In late Q1 and early Q2—we saw a 50% increase in daily average new subscribers, as well as strong growth of total text messaging volume,” said Brian Long, Co-Founder and CEO of Attentive. “The new capital will be used to support our growing operations, as well as to launch initiatives to support specific verticals like e-commerce, food and beverage, schools, and more.”

This extension to Attentive’s latest round of funding will be used to further accelerate the company’s pace of innovation and overall business growth. The company is focused on continuing to scale to meet increased market demand by recruiting top talent and developing new product functionalities. Attentive is hiring across departments, with an emphasis on product, engineering, client strategy, and sales.

“Attentive’s rapid growth is an indicator of how consumers are eager to find a more direct, personalized, and efficient channel to interact with businesses,” said Jeff Wang, Managing Partner at Sequoia Capital Global Equities. “We’ve been impressed by how quickly Attentive’s business has scaled, its strong customer momentum, and the expertise of the team. We are thrilled to increase Sequoia’s partnership with Attentive through our Global Equities fund.”

“We’ve been closely analyzing the mobile messaging space, and it’s clear Attentive has emerged as the category leader,” said Lucas Swisher, Partner at Coatue. “We’re excited to join Attentive’s Series C investment round and look forward to working closely with the team.”

A portion of the new capital will be applied towards the creation of a fund that will help e-commerce, retail, food and beverage, and educational institutions navigate the current climate by providing them with access to Attentive’s technology and strategic guidance. More information about this initiative will be released in the coming weeks.

About Attentive
Attentive® is a personalized mobile messaging platform for innovative brands & organizations that can quickly become a top 3 revenue channel. Using real-time behavioral data, Attentive automatically sends engaging text messages to each subscriber at every step of the customer lifecycle. Over 1,000 leading businesses rely on Attentive and see strong performance, like 30%+ click-through rates and 25x+ ROI. To learn more about Attentive or to request a demo, visit http://www.attentivemobile.com.

About Sequoia and Sequoia Capital Global Equities
Sequoia helps daring founders build legendary companies from idea to IPO and beyond. We spur founders to push the boundaries of what’s possible. In partnering with Sequoia, companies benefit from 48 years of tribal knowledge from working with founders like Steve Jobs, Larry Ellison, Larry Page, Jan Koum, Brian Chesky, Drew Houston, Adi Tatarko, Julia Hartz and Jack Dorsey. In aggregate, Sequoia-backed companies account for more than 20% of NASDAQ's total value. From the beginning, the vast majority of money we invest has been on behalf of non-profits and schools like the Ford Foundation, Mayo Clinic, and MIT, which means founders’ accomplishments make a meaningful difference.

About Coatue
Coatue, founded by Philippe Laffont and Thomas Laffont in 1999, is one of the largest dedicated technology funds in the world with offices in New York, Menlo Park, San Francisco and Hong Kong. Coatue currently manages approximately $17 billion in assets on behalf of individuals, endowments, foundations, and other institutional investors.