The personalized text messaging software company has experienced rapid growth in 2020, and is now working with 2,000+ leading brands & organizations 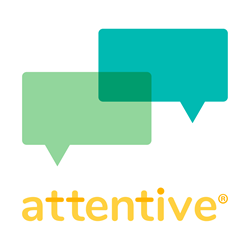 Attentive, the personalized text messaging SaaS platform for brands & organizations, announced that it has raised a $230 million Series D investment round, led by Coatue.

Attentive®, the personalized text messaging SaaS platform for brands and organizations, announced today that it has raised a $230 million Series D investment round at a $2.2 billion valuation, led by Coatue.

This investment comes just five months after the announcement of the extension of its Series C round totaling $110 million in April 2020. Today’s announcement brings the total capital raised by Attentive to $394 million—$340 million of which was secured in 2020.

On average, Attentive is responsible for driving 18.5% of its customers’ total online revenue, with a focus on increasing sales taking place on mobile devices.

"Personalized two-way messaging at scale is the future of business-to-consumer communication," said Brian Long, CEO & Co-Founder of Attentive. "Mobile and e-commerce growth have been accelerated over a matter of months this year, creating a lasting impact on consumer behavior. Within a few years, consumers will expect all of their favorite brands and businesses to support real-time conversations via text messaging, in the same way they expect brands to have social media accounts today.”

"Attentive has become an incredibly important part of our brand's digital strategy and overall revenue growth," said Jeff Silverman, President of Global E-Commerce at Steve Madden. "The platform's capabilities and the team's expertise in the text messaging space are both incredible, and have been integral to our success."

The additional capital will be used to continue to accelerate the company’s rapid pace of product innovation and to invest in the hiring and professional development of top talent. Attentive now has over 400 full-time employees, representing a 310% increase in headcount year-over-year. More people have joined the company since the transition to remote work due to COVID-19 than were on the team prior to March.

Attentive was recently ranked #8 on LinkedIn’s list of “Top 50 Startups in the US” and is hiring across all departments, with a particular emphasis on product and engineering roles.

“We continue to be very impressed by Attentive’s growth and performance and are very excited to expand our partnership with the team,” said Lucas Swisher, Partner at Coatue. “We believe that mobile messaging will be how consumers will want to interact with businesses due to its immediacy, relevancy, and ease of use and believe that Attentive is strongly positioned as a leader in this space.”

About Attentive
Attentive® is a personalized mobile messaging platform for innovative brands & organizations that can quickly become a top 3 revenue channel. Using real-time behavioral data, Attentive automatically sends engaging text messages to each subscriber at every step of the customer lifecycle. Over 2,000 leading businesses rely on Attentive and see strong performance, like 30%+ click-through rates and 25x+ ROI. To learn more about Attentive or to request a demo, visit http://www.attentivemobile.com.

About Coatue
Coatue is one of the largest technology investment platforms in the world with over $20 billion in assets under management. Our dedicated team of engineers and data scientists work closely with investment professionals to add value to founders and executive teams in our portfolio. With venture, growth and public funds, we back entrepreneurs from around the globe and at every stage of growth. Some of our private investments have included Airtable, Ant Financial, Anaplan, ByteDance, Chime, Databricks, DoorDash, Instacart, Meituan, Snap, Snowflake and Spotify.