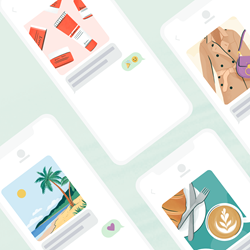 Attentive, a personalized mobile messaging SaaS platform for leading brands and organizations, announced that it has raised a $70 million Series C investment.

In a few years, brands will be expected to engage in real-time, two-way conversations with their customers via mobile messaging,” said Brian Long, Co-Founder and CEO of Attentive.

Attentive®, the personalized mobile messaging SaaS platform for brands and organizations, announced today that it has raised a $70 million Series C investment. The round was led by Sequoia and IVP with participation from existing investors Eniac Ventures and NextView Ventures. This brings the total capital raised by Attentive to $124 million—$110 million within the past six months.

Attentive now works with over 750 leading businesses such as Coach, Urban Outfitters, CB2, PacSun, Lulus, Party City, and Jack in the Box—growing its client list 347% in just one year. Attentive has a tremendous impact on its clients’ business performance, driving billions of dollars in transactions.

“In a few years, brands will be expected to engage in real-time, two-way conversations with their customers via mobile messaging,” said Brian Long, Co-Founder and CEO of Attentive. “You will see every business using personalized messages to communicate everything from marketing, transactions, and customer service—across the entire lifecycle. Our mission is to create the best-in-class solution for engaging with today’s mobile-first consumers.”

After the announcement of its Series B round in August 2019, also led by Sequoia, the company scaled its product teams by recruiting top talent—growing the overall engineering organization 160% since that time. Attentive increased its total headcount 228% in 2019, establishing teams across functions in Los Angeles, Boston, Atlanta, Denver, Detroit, and Indianapolis while expanding its headquarters in New York City.

“Attentive’s growth is a clear indication that people want to interact with brands in new ways, and brands are embracing messaging as an effective way to reach consumers,” said Pat Grady, partner at Sequoia. “We are thrilled to double down on our partnership with Attentive so they can continue to deliver fantastic results for their customers and valuable experiences for consumers.”

“Mobile messaging is the fastest-growing channel for businesses to communicate with consumers, and we believe Attentive is strongly positioned here as the category leader,” said Tom Loverro, general partner at IVP. “The team has grown the company and its product in a thoughtful, impressive way and that is reflected in Attentive quickly emerging as the trusted solution for the largest brands in the world. We’re excited to continue partnering with the Attentive founders and team.”

This latest round of funding will be used to further accelerate Attentive’s rapid pace of innovation, including building sophisticated new platform functionalities. The company also plans to continue its market expansion in response to widespread demand in several new industry verticals.

About Attentive
Attentive® is a personalized mobile messaging platform for innovative brands & organizations that can quickly become a top 3 revenue channel. Using real-time behavioral data, Attentive automatically sends engaging text messages to each subscriber at every step of the customer lifecycle. Over 750 leading businesses rely on Attentive and see strong performance, like 30%+ click-through rates and 25x+ ROI. To learn more about Attentive or to request a demo, visit http://www.attentivemobile.com.

About IVP
With $7 billion of committed capital, IVP is one of the premier later-stage venture capital and growth equity firms in the United States. Founded in 1980, IVP has invested in over 400 companies with 113 IPOs. IVP is one of the top-performing firms in the industry and has a 38-year IRR of 43.1%. IVP specializes in venture growth investments, industry rollups, founder liquidity transactions, and select public market investments. For more information, visit http://www.ivp.com or follow IVP on Twitter: @ivp.