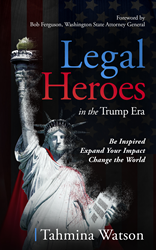 Just six days after Donald Trump’s inauguration in early 2017, he signed into effect a travel ban that singled out individuals for their religious beliefs and created chaos throughout American airports and borders. In the following months, with increasing alarm, legal experts around the country watched as Trump continued to unveil unprecedented new policies that undermined civil and constitutional rights. In her new book Legal Heroes in the Trump Era, immigration attorney, author, podcaster and activist, Tahmina Watson, warns of a developing democratic crisis, and highlights the “activist” role lawyers must play in protecting the rule of law as the watchmen and women of democracy.

Legal Heroes in the Trump Era (150 pages., $19.99) released on Friday October 23rd as an ebook and in print became an instant bestseller charting at number one in all categories on Amazon Best Seller lists. The book begins with a foreword from Washington state Attorney General Bob Ferguson, who is one of fourteen legal experts featured in this book, recognized for his unwavering commitment to challenging the current administration’s overreach. Ferguson was the first attorney general to sue the Trump administration, effectively blocking the president’s unconstitutional travel ban. Ferguson has gone on to sue the administration more than 50 other times, winning all but one lawsuit brought to trial. In addition to highlighting her own work as an immigration lawyer serving the community with innovative access to justice solutions, Watson features other legal experts who are equally as tenacious and courageous in standing up to the American government when it fails to serve the best interests of the American people. Among those profiled are attorney Traci Feit Love, who used social media to create a grassroots network of more than 125,000 volunteer lawyers. Feit’s non-profit, Lawyers for Good Government, has grown into one of the country’s leading large-scale legal response programs. Other attorneys featured in this book have chosen to focus their attention on single fundamental issues: Drew Caputo, Vice President for Litigation for Lands, Wildlife, and Oceans at Earthjustice, recognized that Trump would attack environmental protections so he and his team created a program that has been at the forefront of the United States’ most significant legal decisions protecting public lands, oceans, watersheds, and wildlife. Whether defending the environment, immigrants, racial and gender equality or LGBTQ+ rights, legal experts around the country are rising to meet the moment and using the legal system to fight for the rule of law. Each story in this book is unique and Tahmina hopes that they can serve as a call to action, not just for attorneys but for anyone who believes in American democracy. The time to take action is now.

“The rule of law is not a vague concept, but rather the underpinnings of the mechanics of our society,” said Tahmina Watson. “This administration has exposed the fragility of our democracy. But in working to undermine our civil and constitutional rights, they have awakened courageous legal minds who are committed to defending the fundamental rights that define our country.”

In addition to inspiration, Legal Heroes in the Trump Era, also provides prescriptive guidance for lawyers, activists and others to formulate a strategy and mount a meaningful response, whether it is in the courts or through grassroots community work. According to Washington state Attorney General Bob Ferguson, we all have an important role to play. As Ferguson notes in his foreword: “The law is a powerful tool to confront injustice, particularly during these difficult and unprecedented times,” said Ferguson. “In this book, you will hear from people who believe that our voices are powerful in igniting the change we want to see in this world. Everyone is accountable to the rule of law, including the president of the United States,” he continued. “Now is the time to be bold, and I share Tahmina Watson’s hope that this book will motivate others to get involved today.”

Portions of the proceeds from this book will be donated to Lawyers for Good Government, FWD.us, and Washington Immigrant Defense Network.

Tahmina Watson is a Seattle-based immigration attorney, podcaster and activist. For her community work, Tahmina was recently recognized as a 2020 Woman of Influence honoree by the Puget Sound Business Journal (PSBJ). She is the founder of Watson Immigration Law and founder of the Washington Immigrant Defense Network. Tahmina works with leading national publications as a commentator and columnist and speaks around the country on immigration law and social justice issues. Tahmina serves as a national spokesperson for the American Immigration Lawyers Association (AILA), and the chair of the Response Committee of the Washington Chapter of AILA. Tahmina also serves as a trustee of the Board of King County Bar Association in Washington, a past president of King County Washington Women Lawyers, and a former board member of both the Asian Bar Association of Washington and Washington Women Lawyers. In addition to being recognized for her work by PSBJ, she is a recipient of the 2019 AILA President’s Commendation Award. Tahmina Talks Immigration podcast is available on Apple Podcasts.
Legal Heroes in the Trump Era is Tahmina’s second book. Additional information can be found at http://www.watsonimmigrationlaw.com.

To arrange an online book event with Tahmina or to book an interview to discuss the book, the immigration crisis, or the upcoming election, please call (206) 292-5237 or email
Info@watsonimmigrationlaw.com.

Graphics: For high-resolution images of Legal Heroes in the Trump Era and Tahmina Watson please go to: watsonimmigrationlaw.com