Jury Nullified is a must read for everyone. Jury Nullified is a book which explores and reveals the hidden truth about the coveted jury trial system in America. While jurors conscientiously struggle to reach a fair and just verdict, the judge may have already determined the verdict. 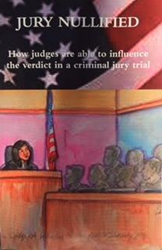 Jury Nullified is a book written by a veteran trial attorney who spent more than two decades wearing out the leather of his shoes traveling from courthouse to courthouse engaged in trial. In this book the author shares a unique perspective and the opportunity to compare and contrast the manner in which different judges preside over criminal jury trials, and the impact those differences can make on the outcome of the trial.

David Kaye is a graduate of the University of California, San Diego, with a Bachelors of Arts degree in Economics. He obtained his law degree from Western State University in December of 1993, and was admitted to the California State Bar in 1994. He subsequently sought admission and was accepted into the United States District Court, Southern District. Mr. Kaye worked as a Law Clerk for a Superior Court Judge in Orange County, and worked as a Law Clerk for the Office of the United States Attorney in San Diego. He then served as a Deputy District Attorney in Tulare County located in Central California. Mr. Kaye left the public sector and established a private practice limited to Family Law and Criminal Law, with an emphasis on trial work. For thirteen years Mr. Kaye was Of Counsel with the Law Offices of Myles L. Berman and represented clients at trial. Mr. Kaye also was trial counsel for the Law Offices of Eugene Ellis for nearly a decade. Mr. Kaye has been active in the legal community and served four years as Co-Chairman of the Criminal Section of the San Diego North County Bar Association. Mr. Kaye has represented more than 4,000 criminal clients and has personally tried more than 250 jury trials throughout every County in Southern California. He was routinely retained by other law firms to represent their clients at trial.