For the better part of two decades, Kevin Lonergan has poured his passion for the law into more than just his career as a personal injury attorney at Herrling Clark Law Firm, Ltd. The name “Lonergan” among members of the State Bar has become synonymous with “mock trial” over the years because of Kevin’s tireless committed service to this program and to the young people of Wisconsin. 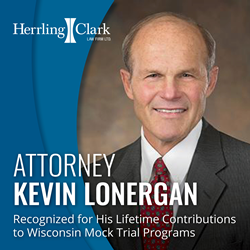 "Kevin is what every lawyer should aspire to be: someone who believes in the work he or she does and lives out that passion in his or her actions.” Herrling Clark Law Firm President Robert B. Loomis

Kevin began coaching mock trial at Xavier High School in 2000 and was fortunate to coach three of his four children. During his thirteen-year tenure with the program, the Xavier mock trial team qualified for the State competition all thirteen years. He coached three State Champion Teams (in 2009, 2011, and 2012) and had the distinguished honor in 2011 to lead his young attorneys to a seventh-place finish at the national competition held in Phoenix, Arizona. During his time at Xavier, Kevin had the privilege to coach alongside other talented attorneys and jurist, including Outagamie County Circuit Court Judges Mitch Metropulos, Gregory B. Gill, Jr., and Carrie Schneider.

Kevin’s experience at Xavier was undoubtedly rewarding but in typical Kevin Lonergan fashion, he dreamed bigger and knew there was more to be done for the young people of our State on a broader stage. Kevin stepped up and accepted the role of Chair of the Wisconsin State Bar’s Public Education Committee, which put him in a position to directly impact Wisconsin’s public education programs, including mock trial programs throughout the State. He also served as a member of the Mock Trial Executive Committee and was instrumental in bringing the National High School Mock Trial Competition to Wisconsin in 2014.

In recognition of his efforts related to the National Competition, the State Bar of Wisconsin honored Kevin with the Gordon Sinykin Award of Excellence, which is bestowed upon recipients who have worked to fulfill a single, significant work in a law-related education or public service project.

In 2015, Kevin Lonergan received the honor of a lifetime when he was selected by the Wisconsin Association of Justice to receive the 2015 Robert L. Habush Trial Lawyer of the Year Award in recognition of a career dedicated to justice and helping educate and inspire young future attorneys to embrace a career in the law. At the time of Kevin’s recognition as Trial Lawyer of the Year, then WAJ-President, Chris Stombaugh, reflected on Kevin’s legacy of service. “Kevin is the epitome of why legal advocacy matters. He fights for fairness in the courtroom and then volunteers even more hours helping young people find their career path. As an organization, we could not have a better role model than Kevin Lonergan.”

In March of 2020, Kevin’s service with the Public Education Committee will be completed and after several decades of involvement with mock trial programs throughout Wisconsin, Kevin will, albeit reluctantly, hang up his proverbial hat. Reflecting on an incredible legacy of service and contributions to countless future lawyers, Kevin explains that “working with our State’s mock trial programs will always be one of my proudest professional accomplishments. I have always had a genuine passion for the law and being able to share that passion with young people and inspire even one or two of them to go on and be tireless advocates for justice is more rewarding and fulfilling than I could ever begin to describe.”

Herrling Clark Law Firm President, Robert B. Loomis describes Kevin’s service as “a reflection of the very best of us.” Loomis knows that for Kevin, serving in the capacity he has for so many years is truly a labor of love. “Kevin has put more time and hours into his work with mock trial than any of us could ever count or imagine, but no matter how much was asked of him, Kevin just stepped up and got the job done. Kevin is what every lawyer should aspire to be: someone who believes in the work he or she does and lives out that passion in his or her actions.”

Kevin Lonergan graduated from the University of Wisconsin Law School in 1979 after obtaining his B.S. degree from the United States Air Force Academy. His love for the rules of evidence and trial advocacy were put to good use in his first position as an Assistant District Attorney in Eau Claire County. In 1982, he joined Herrling Clark Law Firm, Ltd., in Appleton, Wisconsin where he has served clients ever since. Kevin’s practice is entirely devoted to plaintiffs’ personal injury cases. He is Board Certified by the National Board of Trial Advocates. Throughout his career, he has held numerous positions of leadership: President of the Wisconsin Association for Justice; President of Herrling Clark Law Firm, Ltd.; President of the Outagamie County Bar Association; President of the Wisconsin Law Foundation. Kevin has also served as a Court Commissioner since 1994.