Attorney Jack A. Rounick Examines the Pitfalls of Self-Representation in Legal Matters

Pennsylvania family law attorney Jack A. Rounick lists the top three tips regarding why one should not represent themselves in legal matters. 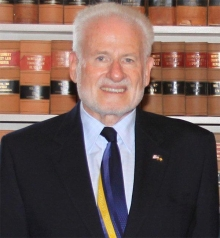 Usually, these people eventually find themselves in over their head. Representing oneself is fraught with peril.

There are many reasons why certain people feel the need to represent themselves in legal situations, with some believing they can handle their case just fine on their own or they simply don’t want to spend money on attorney fees. “Usually, these people eventually find themselves in over their head,” said attorney Jack A. Rounick, who has a “Superb” Avvo rating. “Representing oneself is fraught with peril.”

For those considering representing themselves in legal matters, Rounick, who has more than five decades of experience providing efficient representation, lists the following three reasons why they should reconsider:

No. 1: When it comes to the law, attorneys know best. “Many people believe that they are smarter than any attorney, and are capable of representing themselves,” said Rounick. “In other instances they have had multiple attorneys and cannot find one willing to represent them to raise improper issues. Either way, keep in mind that the law is complicated, even in matters that might seem simple to the layperson.”

No. 2: Unnecessary filing leads to additional fees. Constant filing by unrepresented parties, whether as plaintiff or defendant, causes the other represented party to incur substantial fees. The continuation of this type of filing sometimes forces courts to take steps to prevent the continuation thereof; for example, the court will issue an injunction against further filings by the plaintiff.

“The court’s reasoning was that the party improperly co-opted the judicial system by hounding the other party with continued filings,” noted Rounick. “The action by this court hopefully sets a precedent for other courts in matters, especially in family law matters, where there is a proliferation of parties representing themselves and continuing to file action after action, raising the same issues.”

No. 3: Self-representation takes more time. A party who represents themselves is not aware of much of the law and continues to file documents with no substance. “Parties without knowledge of the law are unable to resolve matters and continue to bring litigation, which causes the prolongation of litigation to the detriment of all, and to the benefit of none,” concluded Rounick. “In my many years of practice, I have seen case after case go unresolved that should have been resolved, because one party was self-represented.”

About the NALA™
The NALA offers small and medium-sized businesses effective ways to reach customers through new media. As a single-agency source, the NALA helps businesses flourish in their local community. The NALA's mission is to promote a business' relevant and newsworthy events and achievements, both online and through traditional media. For media inquiries, please call 805.650.6121, ext. 361.