Upcoming Auction will Feature the Artist's Latest Masterpiece and will Take Place in Hollywood December 18, 2020 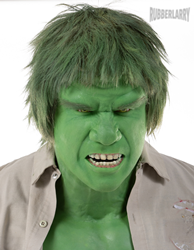 Auction Powerhouse “Profiles In History” to auction off a life size recreation of Lou Ferrigno wearing his original costume in his iconic role as “The Incredible Hulk” by artist Rubber Larry. Upcoming auction will feature Artist Rubber Larry’s latest masterpiece and takes place on December 18, 2020.

Auction Powerhouse “Profiles In History” to auction off a life size recreation of Lou Ferrigno wearing his original costume in his iconic role as “The Incredible Hulk” by artist Rubber Larry. Upcoming auction will feature Artist Rubber Larry’s latest masterpiece and takes place on December 18, 2020.

An astonishing life size recreation of Lou Ferrigno wearing his original costume in his iconic role as The Incredible Hulk from the beloved 1970s tv series is set to smash the record previously set last year by a statue of Stan Lee by artist and sculptor Rubber Larry at auction powerhouse Profiles in History. This Friday the 18th of December, it's Hulk's turn.

The shredded shirt and pants worn by Lou Ferrigno as the Hulk comes to life via a shockingly musclebound, bigger-than-life figure also by Rubber Larry.

To view this item and bid: https://www.icollector.com/Lou-Ferrigno-The-Hulk-screen-worn-costume-from-The-Incredible-Hulk-on-custom-Hulk-display_i39211805

The costume takes center stage in the first season episode 'The Beast Within', where Bruce Banner (Bill Bixby) takes a job at a zoo and is introduced to a female scientist conducting research that may help gain a better understanding of his mean green condition. When Banner's attempts at anger management fail, Ferrigno's Hulk bursts forth, shredding the costume and the scenery.

Months in the making, this hulking, custom fiberglass figure features a flesh-like, makeup-matched green silicone bust originating from Ferrigno's life cast. Original makeup prosthetics, including nose and forehead pieces, were then incorporated into the raw sculpture. Actual crepe hair from the original production was hand punched for the eyebrows, and the screen accurate wig and yellow prosthetic eyes add the final startling touches of Hulkitude.

About Artist and Sculptor Rubber Larry

Hollywood's hired gun for disguise stunt masks and hyper realistic figures, L.A. based FX sculptor and performance artist Rubber Larry is constantly pushing the envelope whether it's bringing an historic piece of wardrobe to life, or punking the public with his incredible ultra-realistic imposter celebrity masks like Keanu Reeves and Norman Reedus.

Producing art since he could crawl, Rubber Larry spent 8 years honing his talents on Hollywood studio lots until going rogue to freelance in the late 90's still providing his skills to the industry and top Hollywood talent. He made headlines back in 2006 when he was hired to create the Barack Obama mask that Senator Obama wore himself as he made his entrance on the infamous Saturday Night Live Halloween episode.

Since then, Larry has virtually perfected what he calls "The Ultimate Clone" employing a proprietary technique to produce uncanny silicone busts and disguise stunt masks. "If it's for a gallery display or museum figure, I want the viewer to think it's the actual person standing there. If it's crashing an event with a stunt mask, I want the bouncer to wave me through."

About Profiles In History

Founded in 1985 by Joseph Maddalena, Profiles in History is the world’s largest auctioneer and dealer of original Hollywood Memorabilia, historical autographs, letters, documents, vintage signed photographs and manuscripts. Born into a family of antiques dealers in Rhode Island, Joseph “Joe” Maddalena learned early on how to turn his passion of collecting historical autographs into a career. Upon graduation from Pepperdine, Joe pursued his passion to become a full-time dealer of historical documents, and opened his first office in 1985. Profiles in History has held some of the most prestigious and successful auctions of Hollywood memorabilia and own virtually every Guinness Book record for prices of original screen-used memorabilia.

Highlights from their previous auctions include the “Cowardly Lion” costume from The Wizard of Oz for $805,000; Steve McQueen’s “Michael Delaney” racing suit from Le Mans for $960,000; From the history-making Debbie Reynolds Auction in June 2011, Profiles in History sold the Marilyn Monroe “Subway” Dress from The Seven Year Itch for $5.52M and the Audrey Hepburn Ascot Dress from My Fair Lady for $4.44M. In February 2012, Profiles in History arranged the sale of a pair of Judy Garland screen-used Ruby Slippers from The Wizard of Oz to the Academy of Motion Picture Arts and Sciences. In June 2017, at his Hollywood Auction 89, Joe sold the Gary Cannavo collection of Battlestar Galactica spaceships for 1.8 million dollars, the Saturday Night Fever dance floor for 1.2 million and an R2D2 for 2.76 million. In May 2018, Joe sold the Big Book of Alcoholics Anonymous for 2.4 million.

Visit Profiles In History at http://www.ProfilesInHistory.com

To view the Auction Catalog: https://profilesinhistory.com/flipbooks/A118HollywoodV4/mobile/index.html

To view this item and bid: https://www.icollector.com/Lou-Ferrigno-The-Hulk-screen-worn-costume-from-The-Incredible-Hulk-on-custom-Hulk-display_i39211805