Podcasting has emerged as a hot new media market. To make the most of the opportunities it offers, Rip Media Group CEO Maury Rogow counsels advertisers to double down on story and focus. 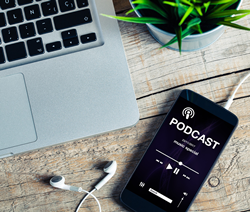 In late February, the audio streaming platform Spotify introduced Spotify Audience Network, which gives advertisers access to over one million podcasts, including those produced by Slate, Vox Media, ESPN, and How Stuff Works.(1) This, notes Maury Rogow, CEO of Hollywood’s Rip Media Group, comes on the heels of Spotify’s early 2020 introduction of podcast streaming ad insertion, which allows podcast ads to be delivered in real time and provide trackable data on number of listens.(2) “Podcast advertising—which can be video as well as audio—has clearly come into its own,” says Rogow. “It gives marketers a great way to deliver focused messaging to a very tightly defined audience.”

That tight definition—i.e., high similarity in tastes and interests when compared to the audiences provided by other media, such as online general website ads—offers advertisers a chance to increase ROI by using a close listener profile/product fit to elicit an outsize response from a comparatively small (and thus comparatively inexpensive) audience.

Recent figures show that 68 million people, nearly a quarter of the total U.S. population, regularly listen to multiple podcasts—an average of seven different shows per week.(3) The programs themselves cover a wide range of topics; among the ten most popular podcasts in the U.S., according to Edison Research, are shows devoted to true crime, economics, progressive politics, news and current events, wide-ranging celebrity interviews, and a fan-driven scene-by-scene, character-by-character analysis of every episode of the television program “The Office.”(4)

While ad treatment on these shows varies, most podcasts, says Rogow, block out time for 30- or 60-second spots at the beginning of the show, at the midpoint, and toward the end. In many cases, the podcast host or hosts deliver the ads themselves; some, in fact, use the advertiser’s supplied copy as the basis for comic improvisation. Conan O’Brien, for example, recently set up an ad for State Farm Insurance by telling his assistant, Sona Movsesian, about a (fictitious) automobile accident he had had, and how much it was going to cost him. “Wouldn’t it be great,” he deadpanned, “if there was something you could buy that would cover part of the expense when stuff like that happens?”

This, of course, places delivery of the advertising message in the hands of an unpredictable third party—an idea, Rogow notes, that makes many marketers extremely uncomfortable. “It’s understandable to want control,” he says. “On the other hand, it’s a good bet that more listeners remembered what Conan O’Brien said, and for longer, than they would have if State Farm had played it safe.”

By the very nature of the medium, Rogow notes out, podcast advertising is micro-targeted. You are, he says, not trying to reach everybody; everybody isn’t going to be listening to “Wait, Wait, Don’t Tell Me” or “The Joe Rogan Experience.” Only some people are, and the advertiser already has a pretty good idea who those people are and what they think is funny—thus, you can take more risk.

And, he says, you should. “There’s no one elevator pitch that will appeal to everyone,” says Rogow, “so don’t try to write one. First commandment of storytelling: Know your audience. Talk to this particular audience, and give them a story, with metaphors and high stakes. They’ll love you for it.”

About Rip Media Group
Rip Media Group, founded in 2007, is a trailblazing video marketing company based in Los Angeles, California. Founded by digital pioneer Maury Rogow, Rip Media Group brings a unique combination of storytelling art and ROI strategy to the field of animation and live action video. Maury is a member of the Producers Guild of America, with several feature films to his credit. His unique background in film production led to an epiphany in the intrinsic value of storytelling in marketing, no matter how technical the subject. This led to his work in a high-tech firm and its purchase by Cisco for over $1Billion. He went on to form Rip Media Group, a collection of award-winning storytellers, technicians, and artists, selected from the Producers Guild, Writers Guild, and Screen Actors Guild. Their Green Light Production Process™ and other proprietary systems are used to create world-class voiceover, animation, and live action video to grow businesses of any size. https://ripmediagroup.com.