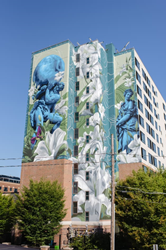 “Augmented reality can add another level of nuance for viewers of public art. We hope to see similar projects melding art and technology in the future,” said Augmented Island Studios CEO Enrique Sanchez-Rivera

In an innovative pairing of artistry and technology, Augmented Island Studios teamed up with artists Eric Skotnes and Ryan Sarfati to develop “The Journey” for client Short North Arts District in Columbus, Ohio. Adorning the Graduate Columbus Hotel, the three permanent murals are the largest in the city and by far the most unique. The murals depict mythological figures which signify the prosperity of Columbus, as well as local Somali woman Hodan Mohammed, founder of the community organization Our Helpers, which represents the diversity present in Columbus.

What makes the murals truly come alive is Augmented Island Studios’s augmented reality app, developed in coordination with the artists to launch viewers into a larger-than-life interactive experience. Scenes of birds fluttering high above the city skyline, flowers blooming from the cracks in the sidewalk, and Atlas straining under the weight of the world are displayed through the user’s phone screen. “Augmented reality can add another level of nuance for viewers of public art. We hope to see similar projects melding art and technology in the future,” said Augmented Island Studios CEO Enrique Sanchez-Rivera.

CODA WORX, a global online community that showcases and celebrates design projects featuring commissioned artwork in interior and architectural spaces, awarded “The Journey” its number one prize in the Public Spaces category as a part of its 2020 CODAawards. The program honors the individuals and teams whose collective imaginations create public and private spaces that inspire us every day. After viewing the murals, Patricia Walsh, a Public Art and Civic Design Program Manager for Americans for the Arts, stated, “The goals of the artwork centered on community, which is self-evident in the use of the image of Hodan Mohammed. Public artworks thrive when the process and implementation embrace and reflect the values and peoples of the community."

The prestigious award comes along with a feature in Interior Design and a yearlong exhibition at the Octagon Museum on the grounds of the National AIA Headquarters in Washington, D.C. beginning in summer 2021.

*A video of the augmented reality experience can be seen on instagram at: @augmentedislandstudios

Augmented Island Studios is a LatinX-owned business based in Portland, OR and with development offices in Cali, Colombia. Their clients come from a myriad of industries, including but not limited to: arts & entertainment, publishing, wine & spirits, architecture, industrial, apparel, and more.