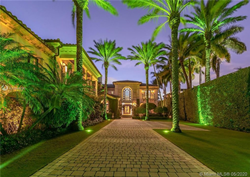 “J-Lo & A-Rod's New Star Island Home”
Jennifer Lopez and Alex Rodriguez have been collecting houses almost as often as Rodriguez collected base hits during his MLB career. J-Lo and A-Rod will soon be enjoying life in their new 14,762-square-foot Star Island mansion they just bought for $32.5 million. One of several man-made islands accessed by bridges off of causeways running between Miami and Miami Beach, Star Island is often referred to as Miami’s Millionaires’ Row. The asking price was $40 million. On the West Coast, the super couple recently listed for $7.99 million a Malibu oceanfront home they bought in 2019 from Jeremy Piven for $6.6 million.

“Regis Philbin’s Connecticut Home”
Regis Philbin was at his best when he was bantering with his audience about the events in his life, which sometimes included the Greenwich, Connecticut home that he and wife, Joy, purchased in 2008, and lived until near his death. A home that Regis often joked about his lack of home repair skills leaving them up to Joy to get done. According to GreenwichTime.com, the home sold for $4.015 million, just a few weeks before Regis died from a heart attack.

“Simon Sells One of His Beverly Hills Homes”
"American Idol" judge Simon Cowell's longtime Beverly Hills home has closed sale at $25 million. According to Variety, Simon spent millions of dollars on upgraded amenities and security including a wellness center, a retina-recognition security system, two kitchens and a solarium movie theater. The home is almost 10,000 square feet on a bit less than an acre in Beverly Hills Flats neighborhood. Simon owns several other properties including his main home in Malibu, another Beverly Hills home, and more homes in New York and London.

“Meghan & Harry's New Home”
After weeks of speculation about where Prince Harry and Meghan Markle would buy a home, they decided on Santa Barbara where they paid $14.65 million for a 14,563-square-foot home on 5.4 acres. They were previously living in their friend Tyler Perry's Beverly Hills mansion.

“Geena Davis's L.A. Home For Sale”
Geena Davis has listed her longtime Mediterranean-style home in Los Angeles for $5.99 million. Geena bought the five-bedroom, over 5,100-square-foot home in 2007 for $4.19 million.

“Rachel Ray Finally Sells Hamptons Home”
It took three years but Rachel Ray has sold her Southampton home for $3.25 million, a sharp drop from the $4.9 million she was asking in 2017 when the 3,000-square-foot home first went on the market. Rachel also owns a home in Upstate New York that was recently damaged in a fire.

“'The Golden Girls' Strike Gold”
The home seen weekly in "The Golden Girls" long-running television show just sold for $4 million – more than $1 million over the $2.9 million asking price. Although the show supposedly took place in a Miami, Florida neighborhood, the four-bedroom house is actually located in Los Angeles.

“Kanye West Plans White House Size Compound”
According to TMZ, Kanye West has been approved by building officials for a 10-bedroom, 52,000-square-foot mansion on his Wyoming lake that will be almost as big as the White House. Kanye also plans to build two more homes and two underground garages on the property.