DeTect’s radar-activated obstruction lighting system is the most widely used ADLS in the world with over 40 systems in the US, Canada and Germany 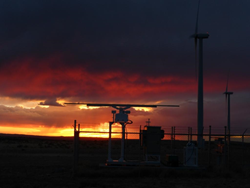 DeTect developed its ADLS in 2008 in response to the Dark Sky Initiative to reduce light pollution for projects with aviation obstruction lighting such as wind farms, high voltage transmission lines and communication towers. DeTect’s ADLS delivers reliable, continuous 360 degree radar surveillance of the airspace around sites automatically activating obstruction lighting only when aircraft are detected at a defined outer perimeter. The HARRIER ADLS is compatible with all turbines, communication networks and lighting systems.

“DeTect’s HARRIER ADLS is the most cost-effective system on the market and includes multiple internal fail-safes, long-range detection and tracking, and specialized algorithms to minimize light pollution while ensuring safe aviation operations,” said Jesse Lewis, Vice President of DeTect Americas. “We are delighted by this approval and look forward to working on projects in Australia.”

About DeTect:
DeTect is a fully integrated radar company with radar research, engineering and manufacturing facilities in Florida and Alberta, and offices in California, Washington DC, Hawaii, England and China. The company is a leader in applied remote sensing technologies for small radar cross section targets such as unmanned aerial vehicles (UAVs), drones and birds. Other DeTect products include HARRIER Security and Surveillance Radars, the DroneWatcher™ drone detection and defense system, and MERLIN™ Aircraft Birdstrike Avoidance Radars and avian radars for aviation and environmental applications. Since 2003, DeTect has manufactured and commissioned over 400 advanced systems in the US, Canada, the UK, Europe, Africa and Asia.