Author A.J. Stone’s new book “Project Titan” is a gripping and potent tale of service, sacrifice, and a second chance for a dedicated Army helicopter pilot.

Recent release “Project Titan” from Page Publishing author A.J. Stone is a fast-paced novel introducing Craig Thompson, a talented combat pilot who grievously injured in a life-changing attack and finds new purpose in a top-secret project hidden from all but a few senior Army personnel. The program is revealed to be more serious- and more deadly- than Chief Thompson is initially led to believe; will he survive this most dangerous mission? 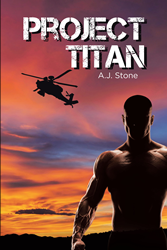 A.J. Stone is a commercial truck driver and Pennsylvania native who attended UCLA and spent nearly a decade writing stories and screenplays as a member of the Twin Bridges Writing Salon in Sherman Oaks, California. He has published his new book “Project Titan”: a riveting drama that keeps the pages turning until the stunning conclusion.

Chief Warrant Officer Craig Thompson, a United States Army Apache Helicopter pilot, is injured while serving in Afghanistan. Now, back home in Fort Campbell, Kentucky, and confined to a wheelchair, his nightmare continues. Luckily, with the help of a ranking officer, Craig managed to avoid being discharged and became an Apache flight instructor in the simulator.

Out of the blue, Craig gets recruited into a program, under the guise that he will be helping other soldiers who have been injured while serving. He jumps at the opportunity and is suddenly immersed into a world of real-life science-fiction and technology. A world where he is able to walk again. But it is also a world of extreme secrecy. So secret is this project that less than a handful of people outside the project know of its existence. The project experiments are conducted in a top-secret, underground facility. The departments within the facility do not know what the other departments are doing, and most of the personnel involved with the project do not know the true and full extent of the project.

Soon Craig figures out the truth behind the project and its real intent. Yet he understands the reason for the project and is completely onboard. He continues to play his role in the project. Though the project is plagued by failures, progress is being made, and eventually the end is in sight. Distant, still, but within sight.

Craig eventually learns that in a world of secrets, there are always more secrets. And some secrets could cost him everything.

Readers who wish to experience this engaging work can purchase “Project Titan” at bookstores everywhere, or online at the Apple iTunes store, Amazon, Google Play, or Barnes and Noble.