Recent release “Out There” from Page Publishing author Aaron Beach is a suspenseful tale about the frightening experiences of Andre Brown, a little boy who figures out how to astral project while sleeping, and how these experiences change his personality. 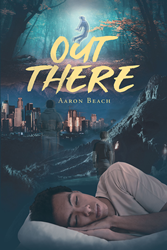 Aaron Beach, a postal carrier for the United States Post Office from southeast Ohio, has completed his new book “Out There”: a gripping and potent tale about the bizarre occurrences that Andre Brown goes through and how these experiences negatively altered his behavior and character.

Aaron writes, “Subconsciously, he prepared for the chunky payoff, but it never came. When he got that upchuck feeling and nothing came out, it triggered a hiccup. Andre had read a book on lucid dreaming and dream control by Dr. Harry Keith, in which the scholar said any trigger that makes you aware that you are dreaming is considered a hiccup, therefore, giving the dreamer the power to take control of their dream and do anything they desired in this stage.

As the youth’s vision came into focus, he realized the dots were actually points of light, and he was in a vortex traveling at an extreme velocity. The tiny points of light grew depth, expanded, and vanished from his peripheral in fractions of seconds. Could this be what he thought it was? He squinted with all his might attempting to focus on the background of the dream. Slowly, his center of attention stabilized, and he realized the points of light were the stars that he had drawn of Superman flying through the galaxy. Andre could not believe what was taking place. He was in his own comic book. He was flying through the cosmos himself. And with that conscious realization, his dream became lucid.”

Like many other children, Andre has trouble fitting in. After the tragic loss of his fellow classmate, Andre, decides to never sleep again, because he read somewhere that sleep was the cousin of death. The lack of sleep causes a harmful change in his behavior. Unfortunately, his parents think this change in personality is due to the recent move and the loss of his friend. After some time practicing, he figures out how to control his lucid dreaming and out-of-body experiences. All of this leads to imminent disaster, as his personality and behavior shift for the worse.

Readers who wish to experience this chilling work can purchase “Out There” at bookstores everywhere, or online at the Apple iTunes Store, Amazon, Google Play, or Barnes and Noble.