Author Alan Bromley’s new book “Gift-Wrapped and Just Desserts” is comprised of two thought-provoking tales of greed, revenge, and the steep price paid for both

Recent release “Gift-Wrapped and Just Desserts” from Page Publishing author Alan Bromley is two separate and compelling portraits of men and women defined by their avarice, lust, and thirst for vengeance against former friends. These complex webs of compounding moral decay keep the pages turning until the provocative conclusions. 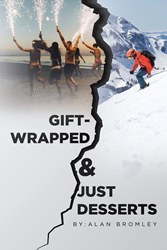 Alan Bromley is a journalist, founder of a public relations firm specializing in crisis management for top financial and legal firms, and a contributing columnist for the Wall Street Journal’s online publication currently residing in Miami Beach, Florida. He has published his new book “Gift-Wrapped and Just Desserts”: a pair of riveting short stories inspired by actual events.

“Just Desserts” is a satirical short story of greed, lust, envy—and revenge taken by a Forbes writer against his “best friends,” the men for whom greed is a religion, and their wives who marry them just for that trait.

Starting at a small ski mountain in Vermont, a clique of rich businessmen gloat to the Forbes writer that they made huge profits on an insider-trading deal (from which they consciously excluded him). When he expresses his anger and disdain, the writer is threatened.

The writer decides to call in a favor from the owner of a well-known (Mafia-run) Italian restaurant hot-spot in New York City, who owed him a favor because he did not write a story about the restaurant—and together they turn the greed-driven couples’ lives upside down…

Until everyone gets their just desserts!

These stories are about revenge, which while often sweet, comes at a cost. “Gift Wrapped” is about a philandering father who sleeps with a beautiful young woman—and then fixes his son up to marry her! “Just Desserts” is about a group of friends who engage in insider-stock trading, but not only leave one friend out of the deal, but brag to him about how much money they made, prompting him to seek revenge. Both of these stories were inspired by true events, but the stories and characters are fictional.

Readers who wish to experience this engaging work can purchase “Gift-Wrapped and Just Desserts” at bookstores everywhere, or online at the Apple iTunes store, Amazon, Google Play, or Barnes and Noble.